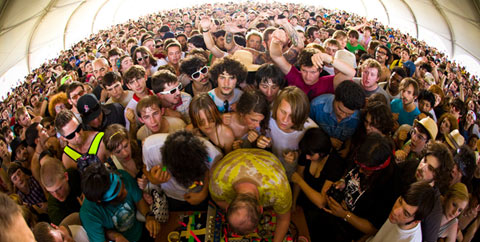 Having sat with Dan Deacon’s Bromst for the greater part of a month now, I’ve come to adore it. I’ve said before it’s like Spiderman of The Rings amplified with extra dog barks, an added dose of insanity, singular pitch-shifted harmonies colliding in a euphony of bonkers synths and melodies. But there’s a subtle change (so subtle that you might not notice it) here compared to previous material.

Before we all knew that Dan Deacon was a Pied Piper who wore neon clothes and Jar Jar Biks t-shirts, looked like Timmy Mallet, led people through human gauntlets, performed with a crystal skull and batshit dance routines, he was just a guy who dabbled in electro-acoustic compositions and while his early stuff was fun but mostly frivolous, Bromst has real depth to it. Like a guy who recognised that part of himself in the past and has dragged it into the future in line with who he has become since. Representing that scholar side of himself.

There’s still absolutely mad bits of music and instrumentation but there’s a weight of substantiality to Bromst which lifts it above Spiderman. He sounds more convinced of his own skills and when people believe in themselves enough, they can create some amazing music.

He plays Andrew’s Lane on June 3rd with his new Ensemble.