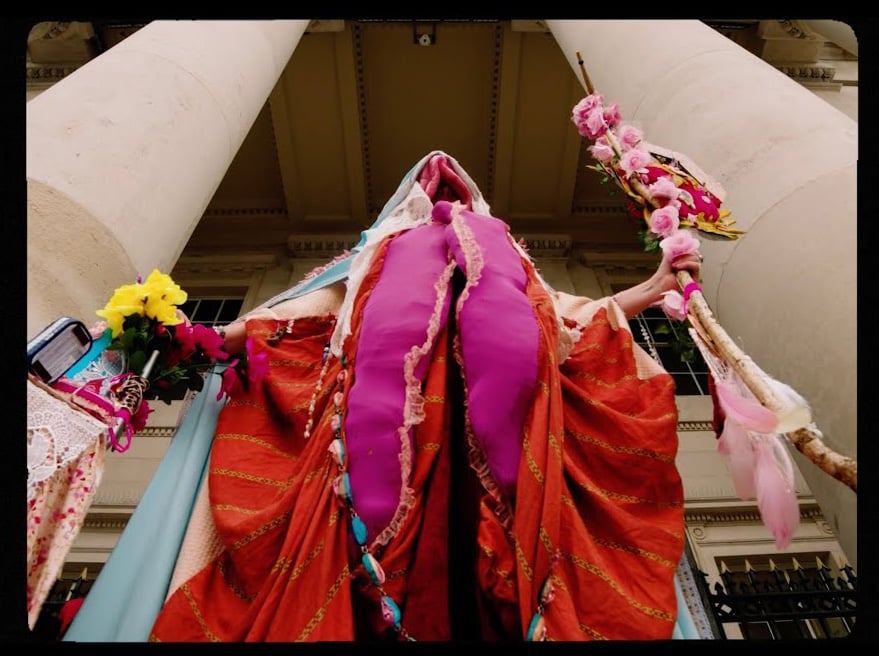 Guud Grief are a Dublin band fronted by Collective Films director Mark Logan who debuted last year with the guttural dusty blues of ‘Lay In The River’, and a mission statement built “around a belief in the rugged rhythms of community.”

For the newest song from Guud Grief, ‘when the working day is done’ takes Cyndi Lauper’s ‘Girls Just Wanna Have Fun’ and subverts it. It’s use here, came from time noting the experiences of women at Magdalene laundries here, and abroad, the protests in Iran, amidst the backdrop of the protesting women in Iran.

“With a rise in violence against women globally, the lyrics to this 80’s anthem took on a darker meaning. Femicide, rape, human sex trafficking and abuse continues on a devastating scale. “

The video features Growler, ” an 82 year old vulva who radically transmutes the trauma of abuse inflicted on women by men.”

Mark Logan has shared a full statement, below, to accompany the video, which starts with a Tupac lyric.

The last time you wrote about us was for our debut single and you said that we were a band with a message. I remember thinking at the time “shit, that’s a lot to live up to”. As I’ve committed more of myself to music, I’ve found it impossible not to use the process for something more than our own gain. I want to make a mirror ball for people to look in and see something of themselves reflected back, that they may not have seen before.

For this song I worked solely from intuition and excitement. It’s odd to do a cover as our second release, but for me it doesn’t actually feel like a cover at all. It’s a subversion, an inward fold of a song.

With a rise in violence against women globally, the lyrics to this 80’s anthem took on a darker meaning. Femicide, rape, human sex trafficking and abuse continues on a devastating scale.

Ecologically, some say, we are beyond the tipping point, this is heartbreakingly reflected in how we, as a species, treat women. I want my voice to join those who know we can no longer tolerate this abusive relationship to the feminine.

When thinking about the video it was a natural yet intimidating prospect to reach out to Growler. She is an 82 year old vulva who radically transmutes the trauma of abuse inflicted on women by men. What I have found in collaborating with her is pure love. I love her, truly. I was shocked when she said that she’d never previously been asked to collaborate on a video, let alone by a man. It was a delicate process but one we are both proud of and the fruits it has birthed.

Taking to the thronged streets of Dublin just days before Christmas with a beautiful 82 year old vulva from The Liberties to hand out roses while she pronounced herself the mother of God was my kind of festive. It got very real when we went into Whitefriar street church (which did you know is actually the resting place of St. Valentine’s heart) to perform the song. Growler, courageously and freely walked up the centre aisle to the altar where she turned and lit a candle. Not a soul said a dickie bird, many shocked faces yes, but no resistance. I was in awe. Her work is so needed and I look forward to more collaboration in the future.

Séan Mulrooney of Tau & The Drones of Praise, assisted with some great directing for the first part of the shoot before a noon pint and hot port in Mulligan’s. Kenneth Adams my best friend and co-founder of CLTV films shot the video. It was cut and coloured by Agata Przygodzka and the legendary artist Dee Mulrooney (who may also be Growler) did the titles. It’s a mad mix to have Tupac, Cyndi Lauper, Growler and myself all in one video, I just want to continue making and performing my music and hopefully it resonates.