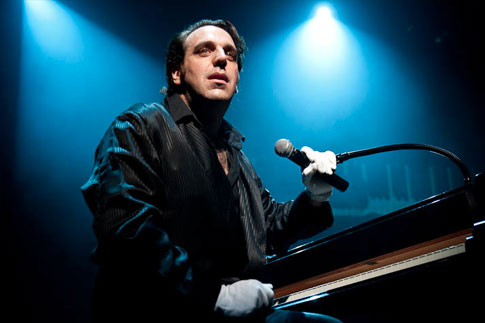 Your live show, the one I experienced in Berlin at least, was raucously brilliant, with two drummers and a second pianist facing you on the stage – and I hope you take this the right way but it reminded me of the famed Donald and Daffy Duck Looney Tunes piano battle. How have you honed your live show?

Daffy was a fantastic pianist so that’s a compliment. My live show is one thing is one thing I can really say I’m very proud of. I really think about every little detail but at the same time I love setting up a game and letting things happen. What you saw was a festival show called Double Penetration. The show you’ll see in Dublin, The Solo Piano Talk Show will be much more closeup. That was a wide shot. What I’m going to do in Dublin is much more intimate. For me, it’s much more complete. It has all the same intensity but a crazy range of other insanity.

You began what turned into an epic piano battle with Andrew W.K. in a New York club last year. Can you tell me about this and how you believe it wil be concluded? Did you really throw a gold chain at him to distract him?

He wanted to have a rematch actually. He wants to do it in London rather than New York, I have to admit, is the birthplace of very avant garde musical ideas of which Andrew W.K. is a proponent. So how can he after I threw a gold chain at him say that I was cheating when he knows that that was a musical gesture? He should know that. He’s the avant garde guy who covers John Cage pieces as an encore. I was trying to be an avant garde motherfucker in downtown New York. He knows!

One last question about Twitter – one of my pet hates with artists on it is their incessant retweeting of people saying how great they are. I follow you on twitter and have noticed that you only retweet people saying slightly negative things about you, which I think is wonderful. How do you feel about the role of social media for artists and bands these days, in particular an independent musicians?

I never cease to be amazed by marketing disguised as other things and Twitter is great because it’s marketing disguised as intimacy. It’s perfect for me as someone who likes to have intimacy with his fans. If this was 15 years ago, someone like me who loves to take photos and loves people to discover my world, that quality would have been very difficult for me to show people. Even just to see my photos. Think of the crazy official channels that had to happen for someone like you would have had go through just to see my photos, it’s crazy. Now it’s very easy. That is amazing. It’s getting easier and easier for musicians like me. I’m just going to say it – the internet is great for musicians. Very rebellious of me, your readers might be shocked.