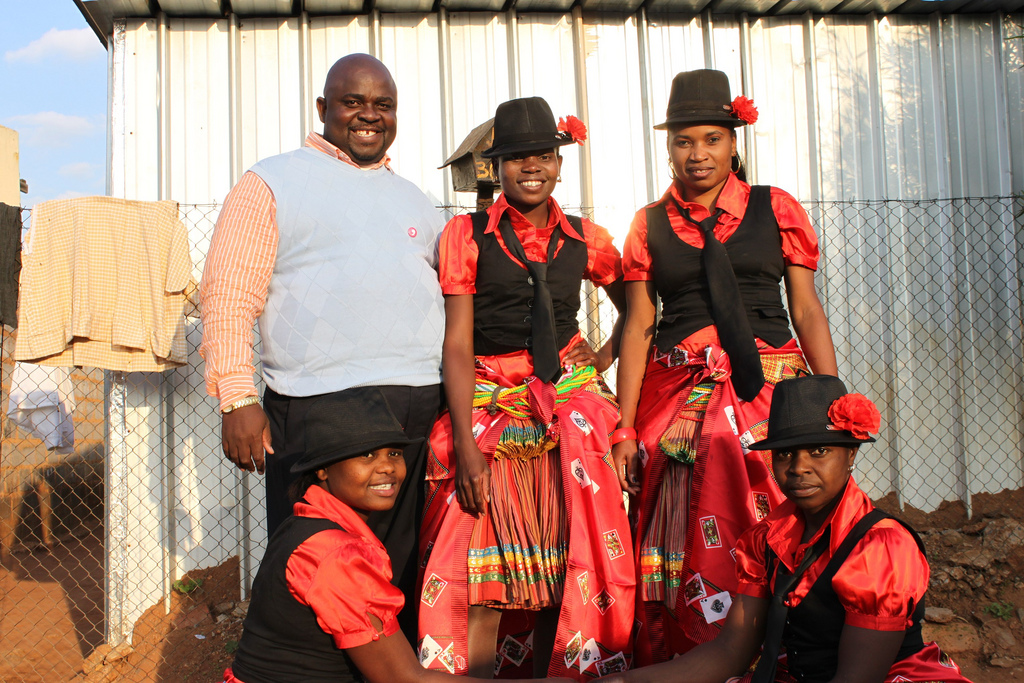 A month before the World Cup kicked off in Soccer City in Soweto in the townships of Johannesburg, I made a detour on the last day of my Smirnoff Experience trip to meet an influential music producer by the name of Nozinja.

Nozinja is the kingpin of the Shangaan electro scene and has been since 2005. Don’t worry if you haven’t heard anything about this genre, it only really exists in the Shangaani areas of South Africa. Shangaan electro is characterised by an ultra fast-pace (180BPM and up), sped-up vocal samples, marimbas, digital beats, synths and afro-centric melodies. It barely exists outside of Soweto but does exist in other parts of the country where the Shangaani people are from in Limpopo for example. DVDs are the primary medium in which the music is shared as the accompanying dancing is just as important as the music. For now, Youtube videos are the primary way of spreading the phenomenon. Just watch this video of the kid-friendly Tshetsha Boys dancing and you’ll understand straight away why I wanted to be there.

After a 30 minute taxi ride from our hotel, myself and my companion Sarah found ourselves waiting outside a Soweto shopping centre for Nozinja to pick us up. Sarah (who works for Dazed and Confused) and I had both independently of each other, sourced a meeting with Nozinja with the help of Wills Glasspiegel, a producer, blogger and field recordist who also had a hand in the new Honest Jons compilation New Wave dance Music from South Africa but more on that later…

45 minutes or so later and a rotund man with an eternal smile, beckons us from his bashed-up BMW in the car park. He is Nozinja but tells us to call him ‘Dog’ as it’s easier for us. “My name is Richard and my grandfather gave me Nozinja, so I like what my grandfather gave me,” he tells us. “That was his name.”

He takes us to his house, where his studio resides. It’s in a desolate place under a motorway and seems like the perfect isolated place to make music. His wife and daughter are there and he shows us his oversized South African music award cheques and trophies, some new songs he’s working on and ladens us with DVDs each to spread the Shangaan music in our own countries.

Nozinja promises to take us to the cultural dance that happens deep in Soweto every Sunday (with another taking place on Wednesday). He plays us some new tracks from his PC.”I will test this song out at the dance, check how the dancers respond,” he says. “When hear it out in the open where there’s a vibe , then I can pinpoint if there’s a mistake and change it before its released”.

We ask him about the Youtube videos we saw and their origins. He explains that a local guy called ‘Shorty’ made them. “They were arguing saying who danced best in South Africa? So we showed our videos to people in other areas, I think we came first,” he laughs.

Nozinja first started making music in 2005. “I had repair shops, specialising in phones and this guy he came to me and said let’s play music. So I said okay and we started researching it for almost a year. I took my time. I came into music, bulldozed them and now I am number one!”

The Tshetsha Boys video is what really sparked off the interest in Shangaan electro for me and Nozinja’s son is actually the young member of the group. He says Tshetsha Boys with their clown masks, orange boiler suits and outrageous dancing are marketed at kids. “They play music at the day care for children so we took those lyrics and made them Tshetsha Boys songs.”

On the way to the dance in his car, Nozinja tells us that the music has got progressively faster over the last few years and it was the main motivation for him making music – “It’s the way they dance, if you dance slowly you will make them sleep. They dance like they don’t have bones. The speed used to be 165[BPM] and then 173 then 176, now we are running at 180. And it’s getting on 184, and I can see it getting faster,” he explains”. People are dancing and they will tell you they want something much faster!”

When we get to the dance 20 minutes later, it’s clear that it is a real community event. In a narrow street, between houses we encounter a slower than expected tempo. Nozinja tells us it will get faster as the day progresses but the song is catchy nonetheless. People are sitting around the concrete street dancefloor, soaking up the dancing and the music. About ten different dance groups, all dressed differently from each other are here. It’s mostly the women who dance to the first number as the men look on, encourage or hover around the DJ table.

The link between the current trend for fast music and the traditional music of the Shangaani people is clear. “Our great great grandfathers and mothers, they used to dance like this,” he tells me while greeting his local friends. “This way is more like the fashion, when you dance like this, you know your history. The skirt that she’s wearing there starts at 1,500 rand (about 155 euro).”

Nozinja’s dream is to tour overseas with Shangaan Electro known across the world (the music can be played live with keyboards and drums). The Youtube videos and the Honest Jon compilation is the start of that he hopes. The music starts to get faster. The skirts are used to full effect to give those hip movements bounce and a young boy and girls joins in:

It’s an exhilarating experience. We are fed a local dish that includes chicken legs and mapani worms. The worms or grubs are chewy and taste like tuna. Not bad at all surprisingly. There is a great sense of pride in the dance and locals come up to us to thank us for being there. It’s a captivating experience and one we don’t want to leave but our plane out of South Africa that evening forces us to leave early.

On the way down to the end of the street, we take pictures of the dancers with Nozinja and a huge number of local people say “shoot me!” to us. They want a picture taken and we are only too happy to oblige. We’ve had an amazing time, one we’ll never forget. Nozinja kindly drops us into the city and we depart. He said earlier that he was called Dog because of his grandfather. Sarah asks him is that because he behaved like a dog? He replied: “No I wish I was liked by everybody, because dogs are everyone’s best friends.” He’s one of the nicest people I’ve ever met so his name is well chosen.

The New Wave Dance Music From South Africa compilation of Nozinja’s music is out now on Honest Jons on CD and Vinyl. It’s also available digitally via eMusic and Boomkat. A picture of mine from that day is used on the inlay. Here is a track from the album:

What Dublin needs: A record shop a la Mono, Glasgow