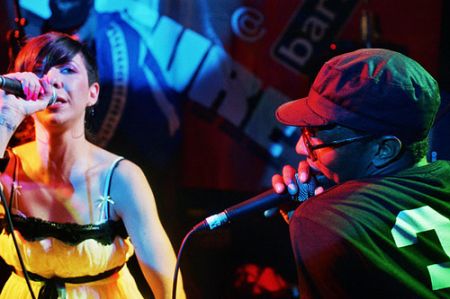 It took me long enough to get into Spank Rock’s album “Yoyoyoyoyo” after hearing so much about them on other music blogs but I’ve finally succumbed. Spank Rock make dirty hip hop party music with plenty of Miami Bass, 808s and bleeps and blips. It’s the fast stuttering lyrical flow from MC Spank Rock that really stands out for me. At times, the lyrics are leaning towards the gangsta kind – on ‘Coke & Wet’ – the chorus is “Coke and wet, bitch/Guns, n***a, holla!”, other times the lyrics are rude and sex-obsessed but ultimately the party mood prevails.

The addition of female MC Amanda Blank on the old school ‘Bump’ obliterates any notion of polite female sass with some of the nastiest lyrics heard on a rap song since those dirty female rap luminary L’il Kim. Anybody who caught them at Garden Party last month will know what to expect. They are also playing Electric Picnic in September so here’s hoping they bring the full crew along.

Spankrock.net has some great stuff for download – a BBC Breezeblock set, Album samples, and videos. See links below. There’s also a couple of YouTube videos featuring Amanda Blank to check out. And finally, the Spank rock remix for Coldcut’s True Skool was posted at Disco not Disco last week.