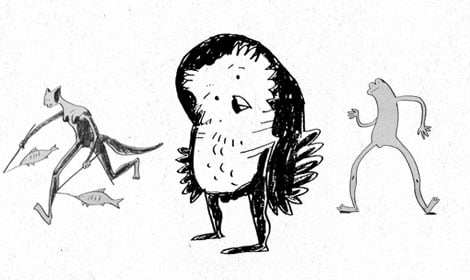 I don’t normally do this but…

If you are familiar with the latest podcast, you will have heard a wonderful tune from Minotaur Shock’s new album Amateur Dramatics out on digital download through 4AD. The album is so good, it deserves a post all on its own. Most interestingly, you can purchase the album through his website – which has the most entertaining liner notes of an album I’ve ever read. I will now demonstate by offering two MP3 tracks alongside choice quotes from his notes, which are under various ratings like technical difficulty, computer crash rating, musical difficulty, extra musicians, live instruments played by me and fun/replay rating. Using these criteria, Edwards has deduced that his album is worth £6.41. My review, which appeared in State is also below the jump.

Trivia: I decided to give this track a 4/4 disco-dance beat at the very last minute, and wondered why I didn’t do that in the first place.

* Come on, Emily makes this track with her pipes. As the melodies were all originally played using dodgy MIDI sounds, she had to do a lot of mystical writing on her lined paper to get it to sound right. This was recorded at Emily’s old house in Brislington, and I think we upset her housemate by making too much noise. I had to edit out the sound of stomping footsteps and the volume on the telly being angrily turned up.

* James played the stabby one-note violin that crops up. It’s worth a point or two, but (and no disrespect to James) I could have played it if I wasn’t scared of breaking the violin. I’m sure James won’t mind, besides he contributed far more to other tracks. Still, I thought you should know.

Fun/replay rating: 16 out of 20
In it’s own way, this is a ridiculous riot. You know it. Would I dance to it? Hell yes. And when those chiming synths come in at 2m20s, I’d go nuts.

Trivia: I just googled “my burr” and was astounded that there is a blog called that. I hate the internet. The title was meant to refer to my gentle, sexy West Country accent. Not some guy’s blog.

Technical difficulty rating: 9 out of 10
This track is going to score highly on all of these. It was hard work. But rewarding, like stonemasonry, I imagine.

Computer crash rating: 9 out of 10
My computer did not like this at all. I kept thinking I should buy more RAM but then I figured that sometimes in life we need constraints.

Musical difficulty rating: 9 out of 10
I wanted to create melodies that snaked in and out like dancing cobras, creating patterns with their swaying scaled bodies as their eyes transfixed like sparkling emeralds. This kind of thing does not come easy to me.

After remixing songs from Hard-Fi, Stars, Holy Fuck and Halfset’s Jeff Martin to impressive effect and secretly recording techno under the name Principal Participant, Bristol’s David Edwards returns to his own material in the shape of a third album as Minotaur Shock. The album starts with a woozy piano and violin tune-up on ‘Zookeeper’ before bass and drums kick in lending creed and direction to the first fluttering minutes. It segues directly into ‘Am Dram’ where the electronics are introduced in the form of squelching synths, gradually outflanking its more organic cousins until a full on Kraftwerk-esque euphoric breakdown. And that’s just the first 8 minutes of the album.

If you are looking for reference points, ‘This Plane Is Going To Fall’ is a bouncy dance number with violin parts which recalls The Avalanches’ sense of bliss, ‘Accelerated Footage’ is Analord acid while ‘My Burr’ sounds like Prefuse 73 playing with lush instruments. Amateur Dramatics is available as a digital download from minotaurshock.com with suggested price for each track (total £6.41) using criteria ratings such as technical difficulty, computer crash, musical difficulty, live instruments played by me and fun/replay factor. A wholly modern and unique release.