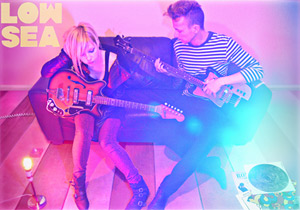 The Low Sea are a little known Galway-based band made up of Billie and Bobby D who have been seducing people with their hazy, spaced-out electronic-infused shoegaze dream-pop. Fans of Hope Sandoval and Mazzy Star will love them.

Having recently signed to Lefse Records (home to Neon Indian, Phaseone) , I’m surprised I haven’t seen much about them yet. That’ll change when the band release their debut EP on the label. In the meantime, the band have an album Las Olas available. They do a mean cover of The Velvet Underground’s ‘Sweet Jane’ (hear it below). Here, Low Sea introduce themselves with some 3×3 facts and you can hear some tunes below too.

Three things we should know about Low Sea

Three big influences on your sound
It changes all the time, but today it would be…
Giorgio Moroder, Wire, Former Ghosts,