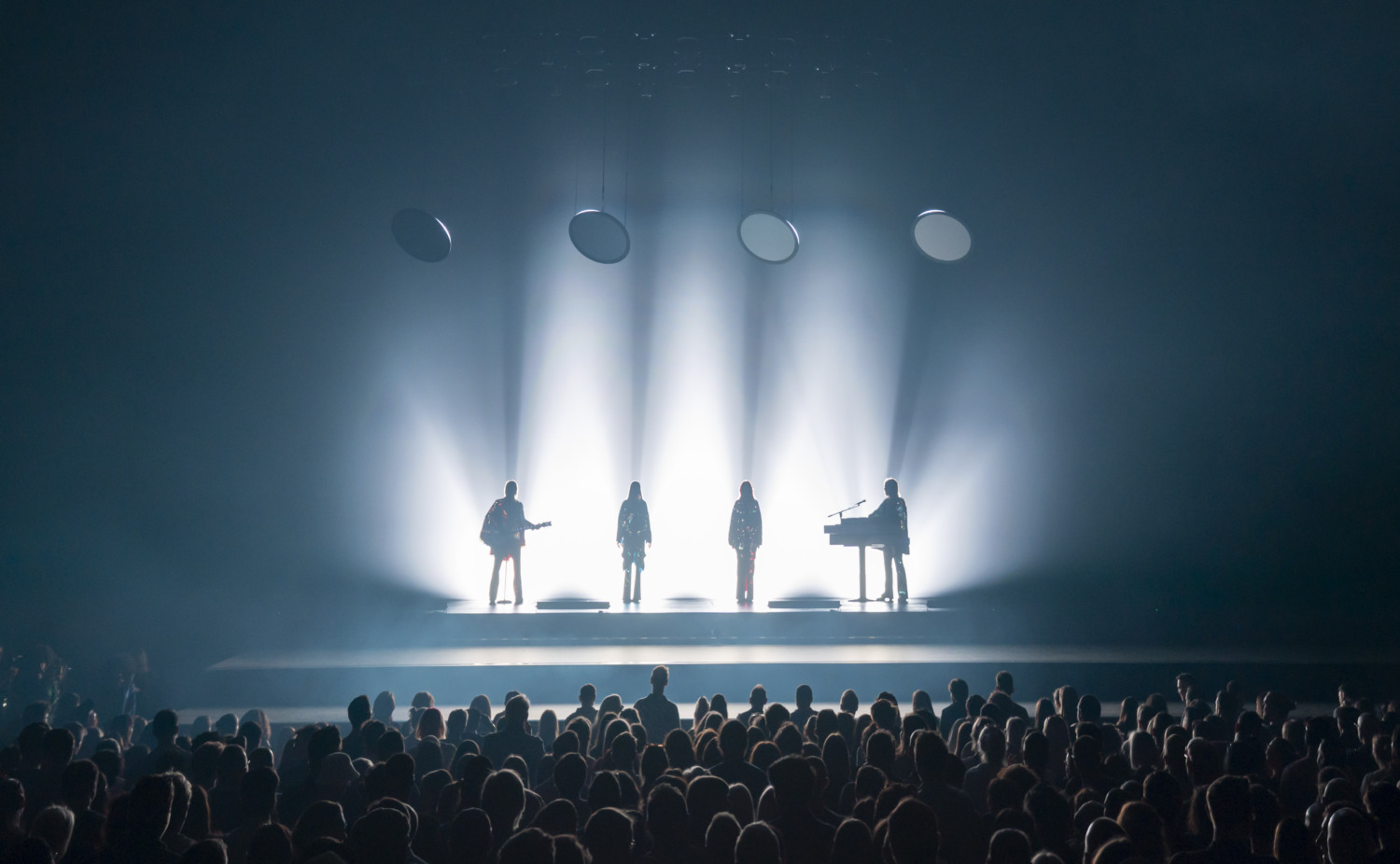 The music of Swedish pop giants ABBA is undisputedly timeless, but with their new venture, ABBA Voyage, the band have made a pitch for their own mortality to remain so too.

The ABBA Arena venue welcomes you to a bright neon concourse (with merch shops, bars, a free cloakroom and facilities) playing ’80s pop hits with cheery, friendly staff who know the secret you’re about to be let in on.

There is more tech in the venue than any regular arena you can think of – 291 speakers and 500 moving lights and mirrors illuminate the audience throughout the show, while a 65 metre-tall screen wraps around most of the venue.

Pre-show, ambient music and visuals of a Swedish forest sets an anticipatory scene, in a sparkling clean new space.

This is a show of virtual hi-tech. Much has been made of the technology used to turn the band as they are now in their seventies – Agnetha Falkstog, Björn Ulvaeus, Benny Andersson and Anni-Frid Lyngstad, into convincing digital avatars (or the “ABBAtars”).

100 animators worked on turning footage of the four ABBAs captured by 120 motion capture cameras, cryogenically frozen as their younger selves in their imperial phase, in front of an audience, along with a live band, it’s really quite a novel experience to witness for the first time. You really haven’t seen anything like ABBA Voyage before.

The 95-minute concert is an immersive experience that uses that big wrap-around screen to re-animate a band who last played live in 1979.

The entire effect is like being in an ABBA Elevator.

The entire thing wouldn’t work, if the Abbatars didn’t feel real, and as the first song in the set – the synthy space disco of ‘The Visitors’ begins, pulsating light beams herald the appearance of the four ABBA figures, life-size, realised in fully ultra-HD video, as to appear as lifelike to the naked eye, as is humanly fathomable. The sashaying, the dancing, the playing, the mic stands, the interplay between them is entirely believable, unquestionably so.

The animated models used, created by Industrial Light & Magic, make use of costume details (designed by B Åkerlund in collaboration with designers like Dolce & Gabbana), bejewelled and shimmering, and are almost impossible to detect from a real 3D person if they were standing and dancing across the stage, except for some slight motion blur in quick movements and the physicality of size when these digital avatars walk a few steps towards the audience. They look, absolutely real, like -you-can’t-believe-your-eyes real. These aren’t holograms, they aren’t 3D, they are 2D renders of 3D models life-size on video screens.

The audience is strongly discouraged in taking photos or capturing video of the performance (with the threat of ejection), so, as to keep the experience a surprise for future attendees, a move that largely works, and keeps people in the moment. The surreal nature of the show does make people want to capture a sneaky bit of footage all the same, though eagle-eyed stewards were on watch and dishing out warnings (though by the last two songs, more cameras were apparent).

While watching the ABBA Voyage spectacle, on more than one occasion, I found myself saying to no-one in particular “f**king hell,” such was the jawdropping rendering of the costuming, hair and movement of the fab four, as the built-in lighting, reflected the true experience of the atmosphere in the venue.

It was there when the band first appeared out of the ground, and Frida’s red cape fell like it was a real shining garment. It was there in the production, when the rising harmony lines of ‘Gimme Gimme Gimme’ were accentuated by half-sun neon-lighting that radiated outwards from the band.

A look at the 3D rendered costume for ABBA Voyage:

Flanked by a super-tight 10-piece band featuring thumping live drums, guitar, backing vocals, saxophone, flute and more, this “live” version of ABBA performed 95 minutes of greatest hits like ‘Chiquitita’, ‘Mamma Mia’ , ‘Lay All Your Love on Me’, ‘Gimme! Gimme! Gimme! (A Man After Midnight)’ and “Dancing Queen’ along with some surprising inclusions like ‘Hole in Your Soul’, ‘Summer Night City along with two songs from the band’s first album in 40 years – ‘Don’t Shut Me Down’ and ‘I Still Have Faith in You’

The thoroughly convincing optical illusion of the life-size performers on stage is only shattered by the closeups rendered on the screen, where the 3D representations become more apparent. That is when the uncanny valley vibes set in, as you look at Bjorn, blown up on the screen, singing backing vocals with glazed 3D dead-eye starring at a point unknown, or Agnetha’s skin looking a little too polished for reality. It’s not enough to ruin a great show.

When the action unshackles itself from the four life-size ABBA performers, it is with mixed results.

The setup allows for quite a few flights of fancy where the ABBAtars disappear from the stage completely, in favour of animated films by Shynola for songs like ‘Eagle’ (I doubt many fans were expecting to hear this 1977 fifth album opener), which follow a hero’s quest, and ultimately makes you feel like you’re watching a music video, while the band were taking a breather.

The virtual band do indeed take “breaks”, as each member addresses the audience individually, with Benny Anderson’s younger self addressing the “to be or not to be” nature of the virtual performers, and Bjorn pretending to have a costume change.

While the set piece performance of ‘Lay All Your Love On Me’ puts Frida and Agnetha in spinning camera action befitting of Tron (like their costumes in the section) is spectacular in execution, it unmoors you from the action on-stage. The more time the life-size ABBAtars are on stage, the more it feels like a proper gig. When the spectacle of the screens take over, it becomes a more passive experience.

A better use of a set piece without the digital performers, is ‘Waterloo’, a live performance where the ABBAtars fade and the video footage of their 1974 Eurovision-winning performance is given centre stage (along with a dig at the UK giving them nul points that year).

The superb live band (working tirelessly all set) getting to take over for ‘Does Your Mother Know’ is a nice way to give the band a nightly spotlight, but it ends up feeling too close to an ABBA covers band, albeit a great one, performing in the spectacular ABBA Arena.

While there are a few surprising omissions in the setlist like ‘Take A Chance On Me’, ‘Super Trouper’ and ‘Money Money Money’, the presence of certified Gold hits ‘Voulez Vous’, ‘Fernando’, ‘Thank You For The Music’ and ‘The Winner Takes It All’ make that feel like a minor quibble.

And only during that last tear-jerking closing song, when a chorus line of backing singers fill the giant arena screen width, does the flat 2D cutout-nature of the representations we’re seeing become totally obvious.

With plans for the show to run in London at least until May 2023 (the arena is basically flat-packed it so it can be transported with ease to other cities hence the logistics partner having its own lounge at the arena), the ABBA Voyage experience is a risk that theatrically, experientially and musically pays off. But it is a big expensive gamble financially, as ABBA Voyage, devoid of corporate sponsorship, needs to make £140m to break even.

It’s tempting too, to wonder what band could possibly try to do this next? The Beatles? (motion capture would be hard to do), Fleetwood Mac? (At least the digital versions of themselves could break up and make up nightly without the need for ongoing therapy), Elvis? (I could see it), Queen? (they do have legacy-tinkering form).

The recent phenomenon that saw 2Pac, Roy Orbison and Whitney perform on-stage as hologram appears to have receded, at least in appetite. And in Asia, K-pop performers have previously performed as holograms back in 2015 and virtual K-Pop stars are a going concern. The question of digitally resurrecting the dead for other performers remains a more complex, unsettling one. With all four ABBA members alive and involved in the motion capture, it isn’t an issue for ABBA Voyage.

ABBA Voyage doesn’t feel quite as gimmicky as those aforementioned hologram shows because of its undeniable execution in the flesh. Ultimately, these ABBA songs are too good, this show is so enjoyable, so spectacularly envisioned and realised, those renderings of ABBA on-stage are so detailed, as to feel real, that you can so easily suspend your disbelief.

See abbavoyage.com for all ticket info.