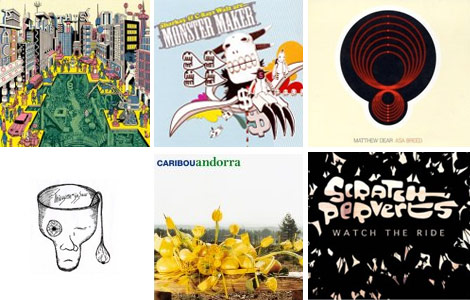 Sometimes I’m too busy to give music the attention it deserves. So with that in mind here’s a roundup of some albums I’ve been enjoying over the last month.

Certainly not something I would usually jump at, but the reviews got me interested. Asa Breed is a wonderful electronic dance pop album full of spectral dance music with a house feel. It has also spawned one of my songs of the year so far in “Deserter” – sort of a moody texture-rich companion to LCD Soundsystem’s “All my Friends” with the same epic quality. Seriously good.

A wonderful uplifting mash of 60’s jangle pop, psychedelia and electronica results in Dan Snaith has made his best album yet. “Melody Day” is the pop tune of the album but there are many more delights. Best listened to in one sitting, no iPod skippage for this one.

An interesting album based on the premise that everyone has a breaking point, that humans are always one step away from chaos standing on the equilibrium (See Adam Curtis’ The Trap documentary series for more on this idea ). Walz himself has had a turbulent time of late with label woes, loss of all his possessions, the death of his brother and not being able to see his son so this was the perfect outlet for him to let loose on with producer Sharkey. Musically, it doesn’t stick to hip hop templates and the tracks are more like a fusion of everything. The album also features Vast Aire and loads of soulfully sung hooks, PLUS THERE’S A VERSION OF EDDY GRANT’S ELECTRIC AVENUE! Don’t forget to read Una’s hilarious rapping interview with C Rayz Walz.

The Scratch Perverts just know how to make a mix as the 2004 Radio One Essential mix proved (Full list of Essential Mixes here). This is another banger featuring the likes of Wiley, Million Dan, Pharoahe Monch, Spank Rock, Loefah, Queens of the Stone Age, Vex’d and some Scratch Perverts originals. They will be playing a Remedy night on November 3rd along with Pendulum in the Tivoli.

Myspace
Out now: Watch the Ride: Mixed By Scratch Perverts

More kooky indie-pop from these crazy Australians. Has the fantastic single “Heart it Races” which spawned a gazillion remixes a few months back. This album is not as busy as In Case we Die and they definitely sound like they are getting used to having two less members. Perhaps a little too over the top at times this takes a few listens to get used to after previous efforts. Catchy.

I caught this “splatter-folk” Norwegian duo in The Lower Deck on Sunday where they explained that this album is based around the Jack the Ripper murders in London of 1888. Banjo, saw and flute are perfect accompaniment to singer Seth’s falsetto voice. The album also features a cover of Daniel Johnson’s “Walking the Cow”. Musically demented and inspiring but best seen live for the full dramatic effect.

The Science of Sleep