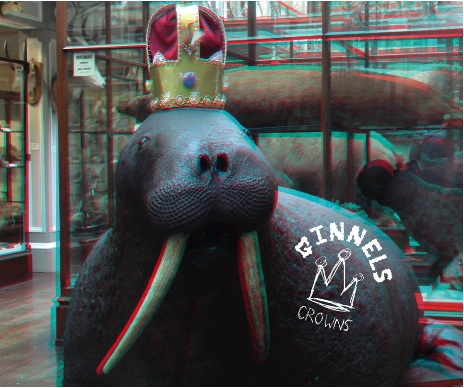 Popical Island may have drawn the compilation series to a close after it helped define their bockety indie-pop collective as a vital part of the Irish music landscape but they are continuing on in the best fashion, by releasing great albums from the bands that helped create the propulsion that drives the Popical name. Ginnels are one such band. Formed from the spare time and creative urges of Mark Chester, guitarist of Grand Pocket Orchestra, it is primarily a solo project.

Previous releases Ginnels LP and Mountbatten Class EP have sparkled with some great moments of lo-fi indie, but Crowns, the new double 20-track album is a more cohesive, consistent listen, despite the longer running time and Chester calling it a “double mess” of an album.

If it is a mess, it’s like an Eton mess of an indie dessert, it’s not super-slick but it is highly enjoyable. Its charms are simple; lead by melody and guitars that whip around the tracklisting with a generally high pace and rhythm – the kind of band you’d want at a house party.

The album flits between the jovial jaunt evident on ‘Gang Of Witches’ or ‘Vicenza’ to the faster-paced pop blitz style exhibited on lead track, the summery ‘It’s Not A Summer (Without You)’ and the likes of ‘Heathwaite Wood’ and ‘You’ll Go Far’. The tempos are nicely punctured by some harmony-led/ more acoustic guitar dream pieces like ‘Festival Walls’, ‘A Boy Without A Crown’ and the title track.

Chester was inspired by long players Guided by Voices’ Bee Thousand, Magnetic Fields’ 69 Love Songs and The Clash’s Sandinista along with a “secret love of hip-hop mixtapes.” That, my friend is nothing to be ashamed of but Crowns indeed does fit on a 60 minute cassette tape.

Crowns is released this Friday through Popical Island with a BYOB gig in Little Green Street Gallery off Capel Street. Details here. Listen to the album:

Waves On Canvas – Into The Northsea