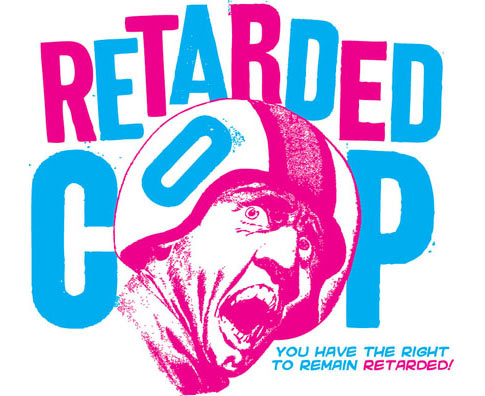 Album of the week time. Those who have been following Gaz Le Rock’s accelerated work-rate over the last six to eight months or so won’t be surprised that the debut album from his pop punk project Retarded Cop is upon us. Entitled You Have The Right To Remain Retarded, the album was made possible thanks to “a mixture of Marshall amps, Gibson guitars, unemployment, sexual objectification, fast food, parenthood, police, celebrity winners and squirrels.” It was recorded by James Eager at the Hive Studios in Wicklow and ‘ElectricGaryLand’ at home in Artane.

Retarded Cop was also made possible by the hiatus of Gaz’s other band Moutpiece and these days, Retarded Cop is very much a full live band experience thanks to addition of Jilly Daly (keys/synths/backing vocals), Kev Pluck (guitar / backing vocals ), Moose (bass) and Wingo (drums). They were a very tight live band for only their second ever gig in The Mercantile a few weeks ago.

You Have The Right To Remain Retarded is filled with fizzy pop, sugar rush punk, choruses made for singing along to with nods to rock ‘n’ roll, ’90s indie and the infectious desire to rock out, while remaining of a “retarded” disposition.

The album is released tomorrow through Rock Flute Records with a launch at The Workman’s Club in Dublin with support from Fag Enablerz and Groom.