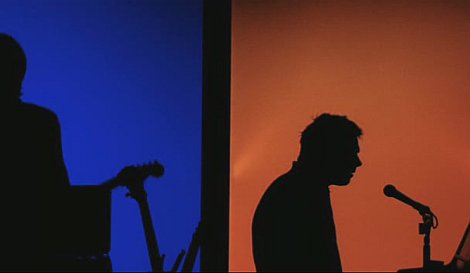 Ones to watch: Nouveaunoise (with added Irish music rant)

I watched the Gorillaz: Demon Days Live from the Manchester Opera House DVD for the first time last night. It reminded me how good Demon Days the album is. It’s probably one of my all-time favourite records. Ìt was some live event – Damon Albarn and his house band including Simon Jones and Simon Tong (of The Verve), drummer Cass Browne, a large string orchestra and backing singers with Jamie Hewlett’s Gorillaz visuals showing on a screen above them. The stage was dimly lit at the back, allowing Albarn and friends to perform silhouetted and they were joined by guests for most of the tracks to perform the album in its entirety.

Guests included Neneh Cherry, Ike Turner, Roots Manuva, De La Soul, Bootie Brown, Shaun Ryder in an embarrassing “I’ve taken too many drugs, I can hardly talk, let alone sing” turn and a gaggle of schoolchildren giving it their all for “Kids with Guns”. It was a superb gig that included a tribute to Ibrahim Ferrer and a Chinese zither in the encore. Who would have thought the boy Albarn would have done so well? From Indie-boy to ambitious songwriter for Chinese Operas, the Gorillaz multimedia ensemble, an African album and now, The Good the Bad and Queen. He’s a bit of a hero in my book.

One of the guests was Martina Topley Bird who has a new album out soon. Her appearance reminded me of the wonderful intro to her 2003 album Quixotic. A wonderful gospel a-cappella track that clocks in at 1 minute 11 seconds, it’s one of my favourite short pieces of recorded music. Have a listen.

WTF: A mulleted Billy Corgan from 1985

Ones to watch: Nouveaunoise (with added Irish music rant)