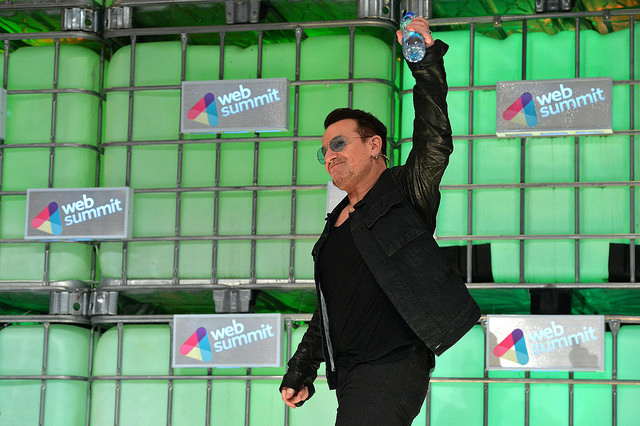 Despite WiFi issues that dogged the event, 2104’s Web Summit saw 22,000 people from 109 countries travel to Dublin last week to hear about the latest in tech, meet VCs and to learn about new developments, pimp their startup and to network with fellow tech heads.

This year, the RDS-held event added a two day sport-stage and a one-day music stage. I spent an afternoon in the Spiegeltent at the latter to see what was on offer.

The hot topic of the day, was, unsurprisingly, streaming music services. As the popularity of Spotify continues to grow, artists continue to look for more return for having their songs on the various platforms.

Last week, the biggest selling album artist of 2014, Taylor Swift explained why she had removed all her music, and disallowed the streaming of her latest album 1989 on Spotify and it was often referenced at the Summit.

“Music is changing so quickly, and the landscape of the music industry itself is changing so quickly that everything new, like Spotify, all feels to me a bit like a grand experiment,” she told Yahoo last week. “And I’m not willing to contribute my life’s work to an experiment that I don’t feel fairly compensates the writers, producers, artists and creators of this music. And I just don’t agree with perpetuating the perception that music has no value and should be free.”

The tactic worked well for Swift’s 1989 album release with the album becoming the biggest selling release in the U.S. at 1.287 million copies, the highest number of single-week sales since 2002.

At the Music Summit, Anthony Bay, the CEO of Rdio, a competing platform to Spotify, said that Taylor’s stance is “anti-free, not anti-streaming.”

The perception that Spotify, Rdio and other streaming platforms are evil is something that was addressed a few times at the Music Summit.

Bay compared consumer expectations of Spotify and Netflix, both leading the charge of streaming in their respective fields of music and movies. Listeners expect the latest releases on Spotify the day or week it’s released, no-one expects the same from Netflix. Why not? We’re used to the movie system of waiting months for a film to be put on sale after a theatrical release. We’ve been conditioned to expect that. With music, we want it now or many of us will close our accounts in protest.

Bay also pointed out that everyone looks at streaming services as the bad guys but Youtube, which has more music than any of the streaming services, much of it illegitimately uploaded by users, not artists, rarely gets criticism from artists and labels. They’re only too happy to use it.

Again, it’s about perception. Youtube doesn’t pay as well as Spotify but is considered a free promotional tool where Spotify is often considered to be taking away sales from artists by their offering. It’s a notion that needs to change, especially seeing as Spotify says it gives 70% of its revenue to artists and labels.

The managers have their say.

Later in the afternoon, it was the turn of the managers to have their say. Jeff Jampol (his own talk is available here), the manager of legacy and heritage artists like the Doors, Janis Joplin and The Ramones sat down with Jonathan Dickins, who manages Adele to discuss the their changing role in an artist’s career.

Dickins said that his role as a manager is to utilise the power to say no “as we’ve hit saturation point in content”. Adele doesn’t do tours or festivals, nor is there an Adele perfume.

Both managers agreed that a current artist’s revenue comes primarily from ticket sales for live gigs (60%). Although, Adele doesn’t do many live events, the fact that she’s sold so many records makes up for it. Dickins said “Adele is the anomaly to the music industry as a whole,” Dickins said. According to Dickins, she has sold 30 million records worldwide.

Jampol went further and said that the idea of an artist who tours to promote a record is and has always been “ass backwards”, meaning an album is the excuse to make money by touring.

Later on, at the Centre Stage, the Web Summit and one of Ireland’s biggest music stars, Bono appeared on a closing panel chaired by New York Times journalist David Carr and discussed U2’s volatile release of their new album Songs Of Innocence via “a free gift” from iTunes.

“We got a lot of people who weren’t interested in U2 to be mad at U2. I’d say that’s an improvement in the relationship,” Bono said.

“Anything that gets your songs out there is a good thing. This is an experimental and exciting period so let’s experiment and see what works,” he told the audience.

Bono said “he’s the wrong spokesperson” for talking about the future of music but if he was starting a band now as a 17 year-old he would be “very excited”.

As suggested around the release of Songs Of Innocence, that gift mechanism won’t be the last collaboration between U2 and Apple. Bono had hinted that he wants to change the album format as a whole and a story he told about telling Steve Jobs that iTunes looked like a spreadsheet, and that he wanted to change that, gives us ideas about where that partnership is heading.

I could only make the Thursday afternoon panels at the Web Summit but there was only one woman on stage at the Music Summit all day which is not good enough. How are we to encourage the next generation of women to aspire to work  behind the scenes in music if panels like this make it look like there are none?

On the whole, you can’t not be impressed by the scale of the achievement of the Web Summit. It’s really put itself on the map. Personally, I think it has room to go deeper into its music summit topics to add something unique.

I would like to see more of the current people working in music and tech represented. Jeff Jampol was a decent guest but he manages artists who are DEAD for chrissakes. Kevin Godley might be the creator of the music collaborative platform Wholeworldband (which was nicely demonstrated live by Simi Crowns earlier in the day) but you’ve got to question why he was afforded 20 minutes to talk about the music videos he made for The Police, Herbie Hancock and U2 in the ’80s and ’90s (not to mention this dodgy one for Bipolar Empire). What relevance does that have in today’s music/media landscape?

I would loved to have a rep from OK Go (they may have tried), a forward thinking director in videos like Nabil, Jesse Kanda or Tom Beard (FKA Twigs’ videos), a discussion about visual identity in music, more artist representation, a keynote speech from an interesting artist, more opportunity for Q&A and more emphasis on the creativity and art side of the commerce.

Of course, all of these things cost more money, but a lot of what was covered at the music summit is covered at the FMC panels at Hard Working Class Heroes or events Digisprouts which don’t come with a high ticket price.

Maybe next year, The Web Summit can really start to use its clout to bring in more people of the calibre of Adele’s manager or the single woman representative, Lauren Witzer Seawood, who is in charge of Beyoncé’s social media campaigns. Intriguing, current and a cross between art, creativity and tech but with plenty of new food for thought.