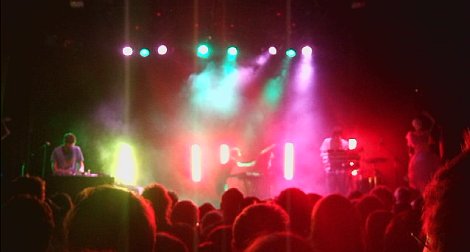 Last night was one of the stranger shows I’ve been to. I knew to have no expectations about an Animal Collective show as you will probably be disappointed. Don’t expect any recorded material at all as these guys seem to be about a year ahead of their recorded output. When I saw them at Oxegen in 2005, they were loud, brash, the vocals were abrasive and despite the obvious mucky sound that night; rather good. I’ve heard they had since largley ditched their live instruments and that they had gone for a more electronics based setup.

With the stage flanked by two dressed-up skeletons, the three members took to the stage in relative darkness and the first strains of “Loch Raven” became apparent. It was an extended version of the song, extended maybe by four times in length, with plenty of drone and echoed noise backing up the disquieted singing of Panda Bear with Avey tutting into a microphone behind him. For the next fifty minutes or so, the show continued with these drone-based noise compositions compounded by only Panda Bear’s lone singing over them. The comparisons to Brian Wilson’s voice are flattering and showed a ring of truth last night, though occasionally his voice faltered slightly in the mix. The songs were all loop-based compositions in the vein of “#1” from Strawberry Jam and the crowd could do nothing but let it wash over them and enjoy the strip lighting show coming from the stage.

One of the highlights for me was the new song they played which employed the syncing of the lights with the arpeggiated pulse tones of the song to great effect. No doubt some uber-fan will be able to tell me the name of the song.

As time went on, I began to wonder why Avey wasn’t singing at all. We soon found out when headlamp-wearing Brian Weitz explained that Avey had the flu and it affected his voice that he couldn’t sing that night. I’ll be honest I felt it was a little cheeky to say this near the end, as it clearly wasn’t a full Animal Collective show. Weitz (or Geologist as he is also known) left the stage with Avey for the night departing with the message that Noah (Panda Bear) had not played any Person Pitch songs in Ireland before and that he would close the show with a few of these songs. I got excited then, as did many others because personally, Person Pitch is one of my favourite albums of the year so a redemption could have been on the cards. Panda Bear played “Good Girl” and two others which were nice to hear but ultimately, only a rendition of “Bros” could have redeemed the show for me.

I still enjoyed parts of it but it was a short set, that never hit any peaks. Anyone else I talked to was similarly non-plussed about the show citing other more incendiary shows they have done in the past that far out-shone last night. Also, I hear that Panda Bear will be back in January so that is worthy of a consideration.