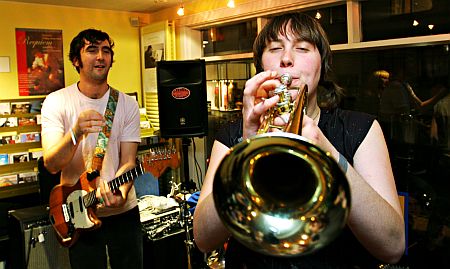 Continuing the great run of gigs in Dublin recently, this weekend saw Dublin host Architecture in Helsinki, DJ /Rupture and Final Fantasy. It was great to see Rupture on Saturday night seeing as I was blown away by Minesweeper Suite and some of his online mixes. Last night though The Village was jammers for Architecture in Helsinki and support band Semifinalists. Walking into the venue during the Semifinalists set, I felt good vibes from the crowd in the venue straight away. This sentiment was echoed by my friend who said the same thing to me independently. Whatever was in the air last night, I was sure there was a LOT of interest in Architecture in Helsinki. 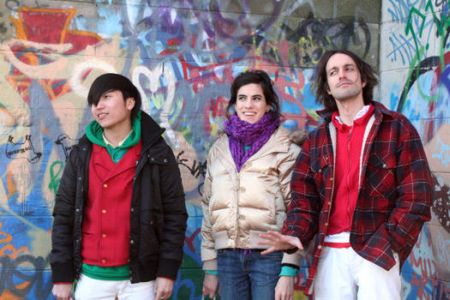 But first, the SemiFinalists. The trio from Chicago, New York and London met at a Film school in London and this ethos has infused their live show with some simple visuals as accompaniment to some really nice dreamy pop/indie rock. They were a great support band as they intrigued the audience and they had an identity that removed them from other bands in their position, due to to the combination of the songs, visuals and the comfort they exuded on the stage. There was a sweet and sentimental end to their set as guitarist and singer, Chris dedicated the last song to his mother, who had joined her son from the US and was in the venue last night and the screen behind the band flashed up a “Happy Mothers Day” message. The Semifinalists debut album is out now.

I really wasn’t sure what to expect from Architecture in Helsinki as “>my previous post had comments ranging from good to bad. Well at first, I was sure that the comment that Padraig made about them lacking “cohesiveness on stage” was going to ring true but this gig was a slow burner that built up to some crescendo. A technical difficulty stopped the band from playing and after a quick runthrough of the Knightrider theme and some swapping of instruments, the gig really took off. They sounded better and were more cohesive but what I enjoyed the most, is the human element of the night. How many bands have you heard say that Dublin is one of their favourite places to play? Last night, there was no skepticism on my part. This band were genuinely enjoying themselves and were thrilled to get such a good reaction off the crowd. Two encores, a great extended rendition of “Do the Whirlwind” , two new songs and smiley faces all round. Not forgetting members of the crowd up on stage trying to sing in Irish. They left the stage to rapturous shouting and applause. A great night.

It’s a Song Contest! Kind of…