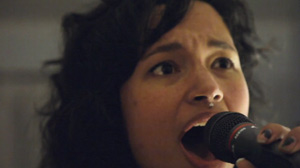 
This track kicks off our 39th podcast yet this is my first glimpse of what Portland band AU look like (though there are only two official members listed), despite them having three albums now. This extended version of the song has that spark that comes from great musicianship. The album, also called Solid Gold is out on The Leaf Label in Europe and Hometapes in the US later in the spring. The B-side to this featuring Colin Stetson is on Bandcamp for free.