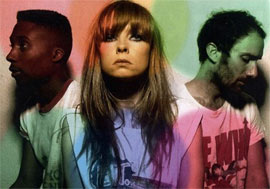 London three-piece and former record company employees, We Have Band officially release their debut album WHB this week. The album is a collection of insistent electro indie-dance jams which I thoroughly recommend as good concentration music.

You can listen to the album currently at the band’s Myspace but as well as that, they’ve also given away a mammoth remix pack of their latest single ‘Divisive’ featuring no less than 10 remixes of the song from Carl Craig, DJ Mujava, Flak Attack, Golden Bug, French Fries, Gohan, Screendeath, Stopmakingme and Tom Staar.

You can grab the whole package here but here are my favourites of the ten.

Soundcloud Player and video after the you know wha..

Stream She & Him Volume 2