Idles to return to Dublin & Belfast

For fans of the New York legendary rap trio, the release of the Beastie Boys Book is a bittersweet thing. When Adam Yauch aka MCA passed away of cancer in 2012, the rest of the band, Michael Diamond (Mike D) and Adam Horovitz (Adrock) immediately announced there would be no more Beastie Boys music made. It made sense. The band were inseparable as friends, musicians and business partners since they grew up in Manhattan in the grimey ’80s New York that would be a big catalyst for their very existence. When Yauch died, so too, did the Beastie Boys as an ongoing project. There was no final curtain, no closure, no finality, no more Beastie Boys.

So the Beastie Boys Book is the final document in the line of activity that started with a novelty song about an ice-cream cake and ended at Bonaroo in 2009.

The book is the last output (save from some archival music which may come some time) from the band’s perspective and the immense sadness of the passing of Adam Yauch is still too painful for the band to delve into. Little is shared in this epic tome about his cancer treatment or final days (“if that hadn’t happened we’d probably be making another record right now”). Horovitz says that it’s just too sad to write about.

Instead, the rebellious spirit of Yauch is retold through details about their beloved bandmate that only highlight how individual he was. Whether it’s the 15-year-long prank involving a ring, him categorising The Dalai Lama as primarily “a funny dude,” after meeting him in the midst of his Buddhist awakening, the maddening characteristic Yauch had of changing a song’s production without telling his bandmates, how as a teenager he had elevated taste in snacks, his love of Superfuzz Terminator bass or his filmmaking alterego Nathaniel Hornblower, Diamond and Horovitz’s respect for the enigmatic Yauch is as evident as the trio’s glue-like friendship.

This 600-page photograph-stacked book spends about half of its time telling the story of their formative years in New York, starting out as a hardcore band after meeting at a Black Flag show, hanging out in Danceteria underage, falling for rap music, that kickstarted their career, signing to Def Jam and becoming the brattish frat-rap boys that defined them during the Licensed To Ill era.

There are apologies for past misogynistic behaviour, how they coldly kicked out Kate Schellenbach of the band when Rick Rubin showed up (Schellenbach gets her own part in the book to give her side of the story – she would later join Luscious Jackson as they were about to release an album on Beastie’s Grand Royal label), they address the privilege that their whiteness afforded them as rappers in the late-80s and their mid ’90s role as arbiters of cool with Grand Royal, the magazine and label, X-Large the clothing label Mike D including the band’s visionary first forays into the internet. 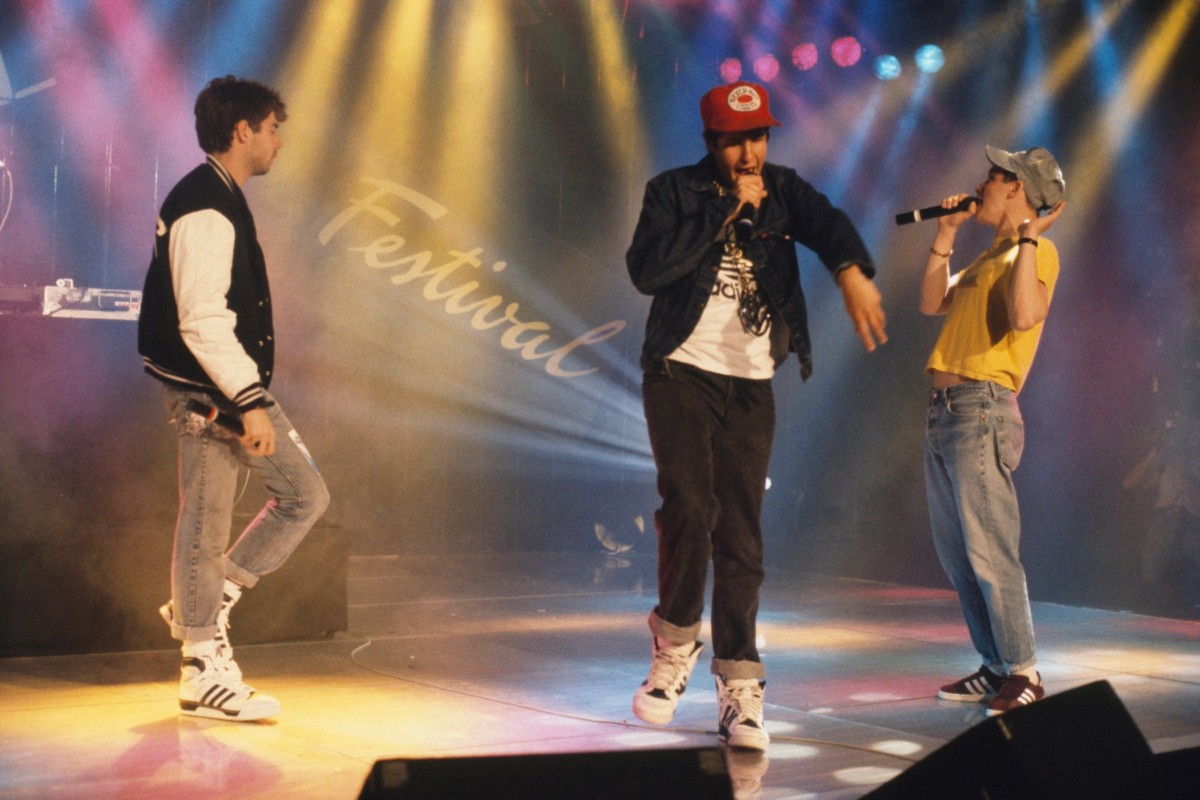 This being the Beasties, the book isn’t a straightforward telling – there’s room for a cookbook by Roy Choi, a lot of song recommendations, a faux oral history of Cookie Puss, equipment lists, a chapter by Wes Anderson who writes a brief made up Hornblower biography and diversions galore into tributes from friends like Amy Poehler and even a hilarious and likely fake pretentious review of Ill Communication.

The Beastie Boys were always a celebration of shared friendship as much as a band; their love of pop culture ephemera, dressing up, their in-joke interview style, their obsession with crate-digging and their extended family of people like producer Mario Caldato, percussionist Amery “AWOL” Smith, photographer Ricky Powell, The Captain and each other is on every page of the book. They interject on each other’s memories, correcting and responding to each other like twins.

No other period in their career gets as much focus as the early years. The British tabloid reaction to their mere presence in the country in 1988 was so exaggerated that Adrock ended up in prison. None of the other eras of their career are perhaps as seismic in pop culture with the exception of Paul’s Boutique (the sample-heavy bouillabaisse soon to be classic which initially tanked on release would later bwe considered an influential once-off classic) so there’s less details of what happened as time goes on, there’s still just enough details about studio shenanigans, song trivia, samples, album methodology and tour stories (Horovitz tells a story about being too high on weed and hash cookies at Electric Picnic in 2007 for example) that even die-hard fans who are all too aware of the band’s Los Angeles Hollywood mansion era will love the way the band reminisce, as if they still can’t quite believe it happened all these years later.

Horovitz’s criticism of 2004’s To The Five Boroughs as somewhat mediocre is harsh but probably fair in the long-term considering their catalogue, as the band struggled to be both serious and remain their humorous selves in the wake of living in New York in the aftermath of 9/11 and a surprising detail about the making ofHot Sauce Committee Part 2 is shared ( Hot Sauce Committee Part 1 was apparently lost in Montana) and there’s not nearly enough about Hello Nasty, my personal favourite album (though Adrock says it’s his favourite) though we do finally hear the inspiration for their career-renaissance track ‘Sabotage’.

The audiobook version of the book is also very much worth owning and cherishing. A huge cast of people read Diamond and Horovitz’s words: Kim Gordon, Jon Stewart, Elvis Costello, Bette Midler, John C. Reilly, Steve Buscemi, Snoop Dogg, Chuck D, Mixmaster Mike, Tim Meadows and Maya Rudolph contribute to the recording, and it’s really worth your time, complete with Adam and Mike dropping in on each other in the narration to clarify or rib their friend buoyantly. This surplus cast of voices is indicative of the Beastie’s impact.

Because that’s the Beastie Boys, three brothers, you know so well that, out of conflicted beginnings, through camaraderie, motivation, gratitude, and a love of music grew themselves into inspiring music careers informed by their own predilections and vernacular. They remained funny dudes. The Beastie Boys’ club is still one you’d want to be a part of and the book is moving, nerdy, vivid, funny dude proof.