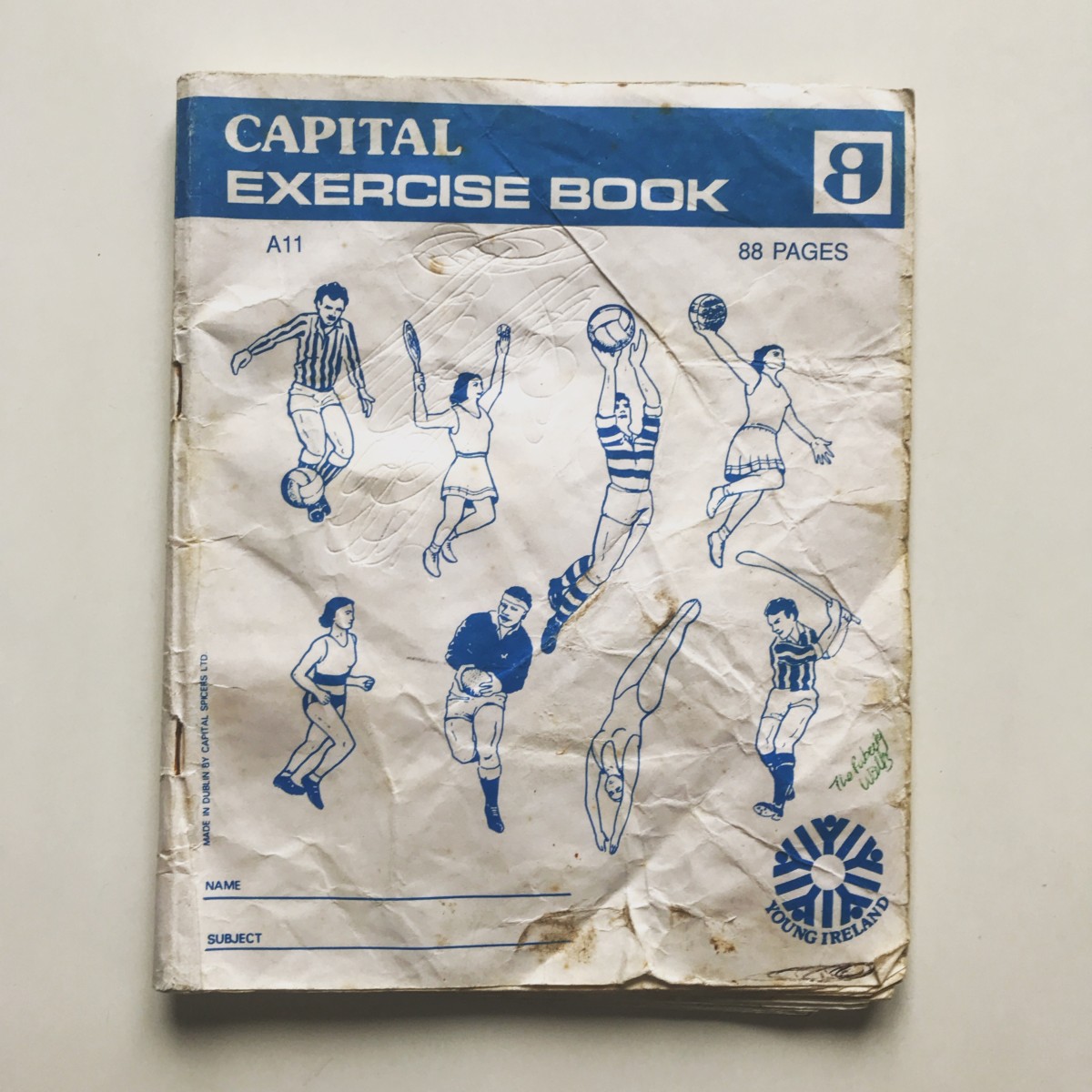 Hailing from An Ghráig in west Kerry, Cian Ó Cíobháin is best known for his long-running, renowned radio show An Taobh Tuathail (The Other Side), which has been broadcasting a treasure trove of underground delights on RTE RnaG since 1999. Alongside Cyril Briscoe, he is one of the founders of Galway club night 110th Street, which has held residencies all around the city, as well as in Dublin, Cork and Limerick. He has been regularly DJing all over the country for the past 25 years, but his debut DJ gigs took place here in Dingle and in Feothanach in the early 90s, where he played all his sounds from cassettes.

Growing up in 80s Ireland, one of the most potent standards of currency a kid might possess was being in ownership of a cluster of blank cassette tapes. If you managed to get your hands on some pocket money back then, some of it might go on sweets, or your favourite magazines, or perhaps on comics. But if you were fanatical about music, you would go cold turkey from these treats and instead spend your money on batches of blank cassettes, which were available in hardware stores, electrical shops and some record stores.

With a blank tape, you had the opportunity to copy your favourite record – if you could get a hold of it – and possess a replica for yourself, which you could listen to anytime you pleased, be it on your Walkman, your double deck, or perhaps in the car, if your parents’ car should have a cassette player.

There was an economy of delay back then that’s difficult to fathom in the current internet era, where everything is available immediately and on-demand. Now, when someone mentions a track or artist to you, within moments you can go online and immerse yourself in their sound (and every word, image and opinion ascribed to said artist). But back in the 80s, you might first read about a song in a magazine such as Smash Hits, or grasp a careless whisper of a tune on pop radio (Radio 2, or Radio Luxembourg), or even on TV ( Top Of The Pops or on Vincent Hanley’s MT USA show). Then – unless you happened to be very quick enough on the draw to have recorded the song from the source at that very moment in time – if you wanted to hear it again, you either had to wait and wait some more, until another DJ happened to play the same song on another show, or you had to try and find someone who had actually bought the album and record it from them. There was a certain thrill associated with the slow, patient hunt for a track that contemporary music lovers no longer get to experience.

Blank tapes cost a fraction of a cassette album so it made sense to find someone who actually had bought the album, so that you could borrow it from them, then copy it. You could pretty much pick up ten 90 minute blank cassettes (C90s) for the price of an album. Each C90 might reasonably house two whole albums, so that was 20 albums for the price of one! No wonder the music industry was aghast that ‘home recording is killing music’ as thousands of pint-sized pirates built up an arsenal of copied music, where the artist never received a penny. Innocent times, when you consider the prevalence of free music files online now.

It was companies such as BBC, BASF, Bush, Mitsubishi, TDK, Sony and Maxwell who made these blank cassettes and benefited financially from the home recording industry. They manufactured blank cassettes of various duration. You had C60s (30 minutes each side), the more popular C90s (45 minutes each side) or – latterly – C120s (though these would often end up in a tangle due to to the excess amount of tape). Provided you had the set-up (a double deck with a record player, for example), you could record your friends’ records, your brother’s compilations or your aunt’s albums. While the recording took place, you might fill up the time by trying to mimic the font of the artwork as you transcribed the information to your blank tape covers. The more artistic kids might go the whole hog and ‘trace’ the entire album sleeve.

As boys and girls became teenagers, our musical horizons expanded beyond what was on mainstream pop radio. In early 90s west Kerry, a culture emerged of discovering hitherto hard-to-find music and sharing it with our friends. There we are on the school bus, driving around Ceann Sléibhe en route to our respective schools (buachaillí agus cailiní, the boys to the CBS, the girls to the convent) in An Daingean on a cold January morning, exchanging albums by The Stone Roses, Cocteau Twins, Joy Division, Kitchens Of Distinction, The Go-Betweens and The Cure. The back of the bus hummed with excitement as tapes were passed on from boy to girl, from girl to boy – for one night only, mind – so that we could bring the cassette home and record the contents with our blank tapes.

Soon we began to make cassette compilations for one another. I certainly made countless mixtapes, such was my evangelical zeal to share the music that I discovered. There might be a theme, such as ‘An Introduction to the Pixies’, or a more sublimated theme, such as ‘Listen to these songs and please like me, cos I think you’re beautiful’, or simply ‘Listen to these songs and I hope they fill you with as much wonder and joy as they fill me’. Many were made for first loves and, indeed, second loves.

Making a mixtape took time. You had to choose the tracks that you wanted to include, then line each track up one at a time, from the various primary source cassettes, before hitting play and record (simultaneously!) on the blank cassettes side of the double deck (I still have the muscle memory of these manoeuvres). You would then remain in the room until the song ended, so as to press pause on the cassette that was recording, then swiftly line up your next choice. We all became experts on finding that perfect song under 2 or 3 minutes that might fill up the last few seconds of one side of a blank tape. It was considered a type of sacrilege for a song to abruptly stop before the end of the tape, so you had to choose carefully. ‘Ana’ by Pixies, ‘Please Please Please Let Me Get What I Want’ by The Smiths or ‘The High Monkey Monk’ by Cocteau Twins used to see out a lot of those recordings.

Because I was obsessed with Factory Records, I had my own imaginary bedroom/boutique record label called Warsaw Records (Warsaw being an early name for Joy Division). Each compilation I made had a WRSZ number attached to it, in the same way as Factory had a FACT number. Once I bestowed a cassette on someone, I rarely saw it again, but I did keep a catalogue, in which I listed all the compilations I made. This included the title of the compilation, the catalogue (WRSZ) number, for whom it was made for and all the tracks contained on the compilation (in case I’d make another tape for that person down the line and I wanted to ensure I wouldn’t be repeating myself).

Here’s my old copybook cataloging cassette compilations that I made in the early 90s on display at the Waxing Lyrical exhibition at Other Voices. Overheard a lad commenting ‘Jesus Christ, it’s like it’s the fuckin’ Koran’. #AnDaingean #nerdycompletist #OtherVoices #holybook pic.twitter.com/GzqAmlNWkl

When I first began DJing at school and youth club discos around Dingle in the early 90s, I used to play my music off cassettes. CDs hadn’t yet taken off and I didn’t have much music on vinyl. All my music collection at that time was pretty much on cassette. I used to play tunes that were popular with my fellow teens, but also try and sneak in the odd indie track that blew my mind. My DJ moniker at my first gigs was ‘The Black Crow King’ (after a Nick Cave track).

In many ways, this endeavour of finding music and sharing it with others is a blueprint for what I’ve been doing since 1999 on An Taobh Tuathail. The formats may have changed, but the idea remains the same. I spent my daylight hours immersed in and discovering music. Then when the red light signals to go on air each night, my radio show, becomes a mixtape of sorts, full of wonderful sounds to be shared with you.