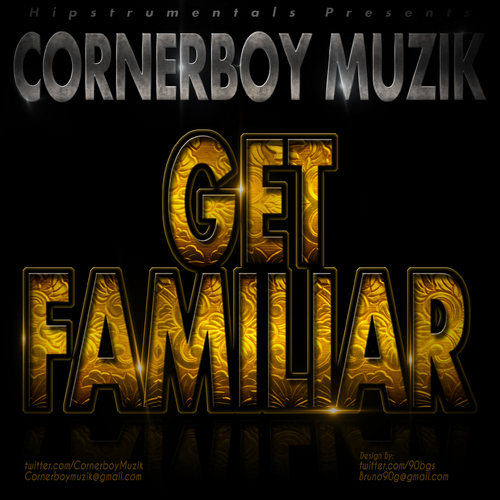 
Cornerboy Muzik is a rap music producer from Cork who has already produced beats which have been used on tracks featuring new American rappers Young Thug and Fat Trel and his bio also lists Kirko Bangz, Bun B and UK’s Roll Deep, Skepta and Giggs. That’s not something you expect from an Irish beatmaker but neither is the quality of the instrumentals on offer on his Free download from Get Familiar Instrumentals Tape.

Cornerboy says he just started networking on Twitter with some UK rappers and some of those tracks he made ended up on radio there including “on BBC Radio One on Tim Westwood, DJ Target, Charlie Sloth and Mistajam.”

He’s been focusing on the US since, as “the UK moves a lot slower” and he’s “managed get a few major placements so far such as Fat Trel, Chicago artist Edai and recently been working with Bun B and his team, Trill Gladiators.” The track that features on the mixtape – ‘This Summer’ with Young Thug and The Rock Mob he says is “doing really well in the clubs and on radio in ATL right now.” Up next, he’ll be working with K.E., a producer for Rick Ross. Not bad for a kid from Cork.

As for the mixtape: There’s the grime style of ‘Pull Up’, the deep trap of ‘Look At Me Now’, the Evian Christ-esque ‘Priceless’ or the TNGHT-style stabs of ‘Drop’, Cornerboy Muzik’s tape exudes the sound of what’s big in American rap right now. The LP comes with five tracks featuring some rappers on those beats including Giggs, Jose Guapo, Fat Trel, The Rock Mob and Young Thug.