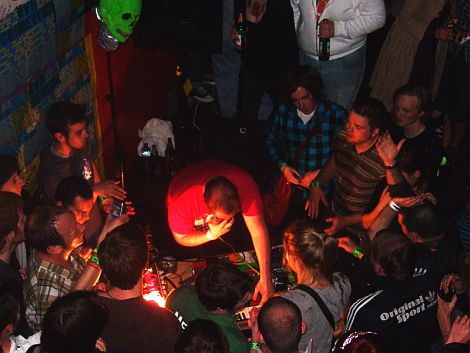 I went to a Dan Deacon show and I walked out wearing a fluorescent yellow neon t-shirt. Such was the insane experience of Friday night in Crawdaddy that it turned me into a new rave looney look-alike. Kieran says it was “one of THE best gigs of my life” and Aoife says “Dan Deacon changed my life” and holy moly, I’d have to agree, it was something magical altogether. I’d read about his legendary live shows and that he puts a table with his electronics into the audience and plays from there but I don’t think anything prepared me for what was the follow.

First up, a shoutout to the wonderful support So Cow. Brian aka So Cow played a solo set to backing tracks of his songs and even took the liberty to record the pre/post-show banter to hilarious effect. The highlight of his set was the last song which Aoife referred to called “To Do List” with some humorously cutting but ultimately sweet lyrics – “I’ve yet to fuck with the Nation of Islam / Yet to make the FBI’s Most Wanted list / and I’ve yet to try and commit suicide on stage and I’ve yet to lose desire for your kiss.“.

After that, the night became something far removed from your ordinary gig. Deacon set up his table of equipment and got the crowd on his wavelength by playing “Under the Sea” from The Little Mermaid which was proceeded by a 35 second countdown to the first note of “Okie Dokie” which really set off the crowd the right way.

With the house lights off, Deacon controlled all the lights in the venue with two lights on his table and another one encased in a flashing green skull on the end of a mic stand. Everyone crowded around him into the corner of the room, spilling beer on his equipment till he put a stop to it. People were moshing, crowd surfing and dancing from the off. The atmosphere was akin to a frenzied kids TV show where the kids were responding to their hero with such aplomb that you had forgotten it was a gig you were at, such was the awesome spectacle. The audience participation kicked up a gear with a beautiful idea of singing “Silence like the Wind” into a complete stranger’s eyes for the whole song without flinching and a Dan Deacon Dance Contest which culminated in a beautiful sit-down sing-a-long moment:

Deacon is a such a great performer not something you’d expect from a product of an academic graduate of electro-acoustic composition. He gets the crowd hyped up with his squealed voice effects and 80’s synth sounds helped by the unusual gig setup. Seeing people on the stage watching with BIG smiles on their faces added to one of the most triumphant, incendiary and visceral show I have EVER seen. What a hero. Fair play to Foggy Notions for bringing him over, Dan himself said he’ll be back in November or December. Get his Spiderman of the Rings album it’s one of the best of the year and do not miss the next show!

In honour of his return, here is “Wham City”, a 12 minute batshit crazy potentially tune of the year, which Dan did not play because he did not bring his Wham City choir lyric sheets (More on the Wham City artist collective). He promised to play it on his return. Brush up on your lyrics. All together:

“There is a mountain of snow / Up past the big glen / We have a castle enclosed / There is a fountain / Out of the fountain flows gold / Into a huge hand / That hand’s a held by a bear / Who had a sick band / Of ghosts and cats and pigs and bats / With brooms and bats and wings and rats / And play big dogs like queens and kings / And everyone plays drums and sings / ‘Bout big sharks / Sharp swords / Beast bees / Bead lords / Sweet cakes / Mace lakes / O MA MA MA MA MA MA MA MA!!!”