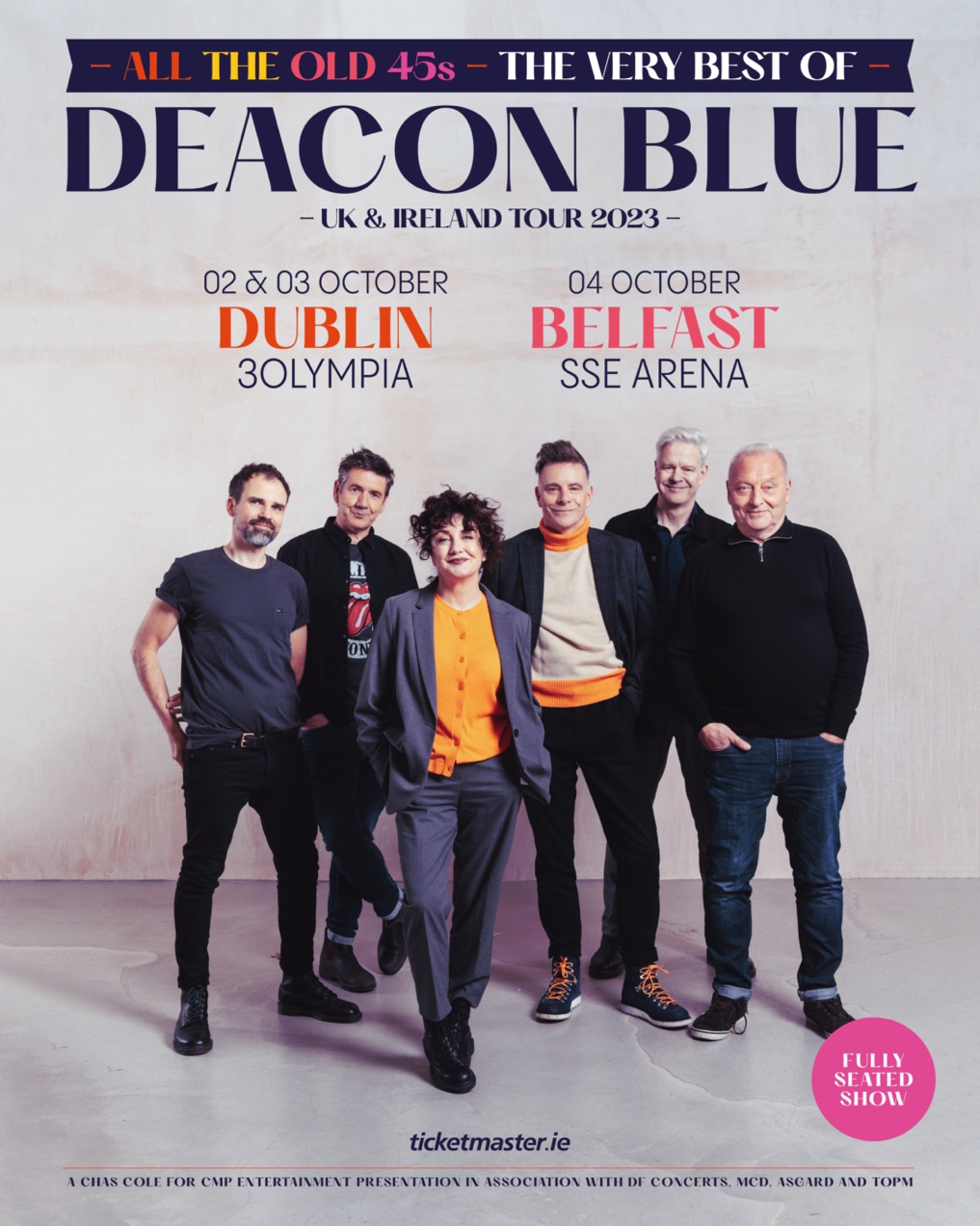 Deacon Blue, the Scottish pop band known for hits like ‘Real Gone Kid’, ‘Fergus Sings The Blues’, and ‘Dignity’ are set to play Dublin and Belfast next October 2023.

Pitched as a greatest hits show with “All The Old 45s” (named after a line in ‘Real Gone Kid’ of course), the band will play “top 10s, the favourites, the sing-a-long rarities,” at Dublin’s 3Olympia Theatre for two shows on on 2nd and 3rd October 2023, along with a Belfast show on October 4th 2023.

The shows are fully seated.

“We’ve decided to play a Greatest Hits show with a difference,” vocalist and songwriter Ricky Ross says. “Yes, we intend to play all (or nearly all) the old 45s, but we also want the first half of the evening to be an intimate acoustic performance, the band gathered round the piano with acoustic guitars and whatever Dougie decides to hit. We’ll play some album tracks and reinterpret a few favourites from the back catalogue. We’ll take a short break then come back and make a lot of noise. We hope you can be part of that noise.”

Kicking off in the birthplace of pop (as Ross’s recent memoir attests, everything comes back to The Beatles), the tour will launch in Liverpool (at the M&S Bank Arena) – a city which has long held a special place in the band’s collective heart – before travelling the length of the land. Ross, co-vocalist Lorraine McIntosh, Dougie Vipond (drums), Jim Prime (keyboards), Gregor Philp (guitar) and Lewis Gordon (bass) will breathe new life into well-loved songs like ‘Dignity’, ‘Loaded’, ‘Wages Day’, ‘Real Gone Kid’, ‘I’ll Never Fall In Love Again’, ‘Your Swaying Arms’, ‘Twist & Shout’, ‘Your Town’, ‘The Hipsters and City Of Love’ and so many more.

The dates will culminate in a homecoming show at Glasgow’s OVO Hydro, a stone’s throw away from the Finnieston Crane, which defined their debut album, Raintown. It’s a suitably celebratory space for the final fling on a special tour of Deacon Blue’s greatest hits – and the rest – as they reel in the years and the ships and the songs, in the hurricane days and summers and suns, amplified and unplugged, surrounded by friends in cities of love.