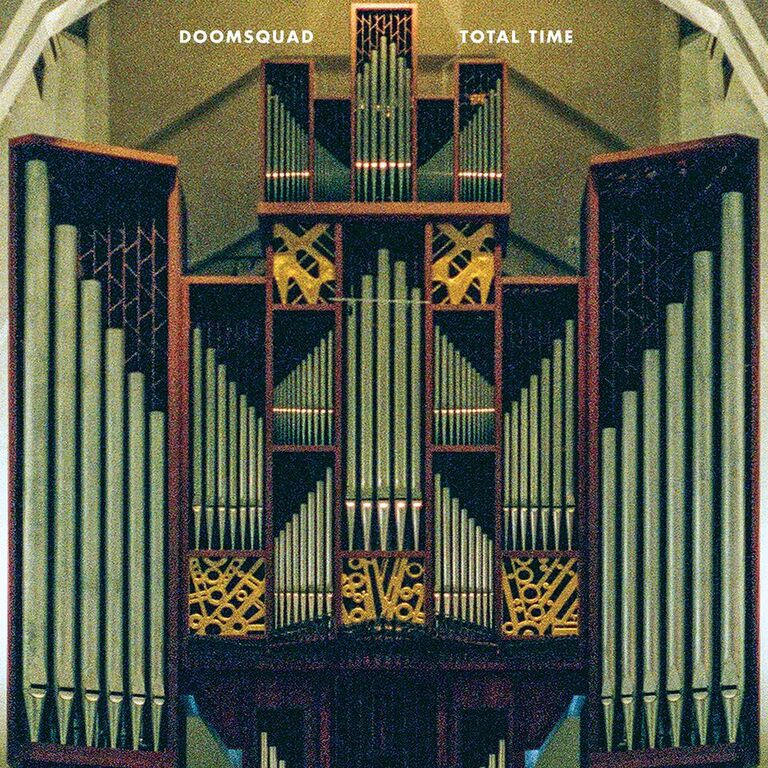 The Toronto band Doomsquad began life making “sandpaper-cheesegrater folk music,” but the transition on second album Total Time sometimes feels removed from that description, that it sounds like it might have been a joke.

One thing that Doomsquad, siblings Trevor, Jaclyn, and Allie Blumas, could have been called is psychedelic. Total Time is full of psychedelia but it’s also full of rhythmic focus and electronic textures.

For an album recorded in the New Mexico desert, New Age ideals are never far away. The album’s stated purpose?

The songs on Total Time are meant to lead you through a genderless experience of transition to owning time, losing time, and becoming timeless, while providing a platform for you to dance through your consciousness.

‘Who Owns Noon At Sandusky’  “was written to inspire the nakedness in us all, a song to wake up our inner clocks and reclaim our circadian time,”  and the percussive enjoyment of ‘Solar Ass’ may rightly raise eyebrows when you find out it is a love song to a donkey, but the songs still bang.

Those ideas could become grating depending on where you are at in your life but the Blumas’ wisely allow their low-end rhythms to carry them along. The album’s most two transportive songs ‘Who Owns Noon At Sandusky’, ‘It’s The Nail That Counts Not The Rope’ and ‘Pyramid On Mars’  rumble along on rhythmic foundations as vocals, synths and guitar puncture the air.

Those basslines may remind you of Holy Fuck!, which is good because they were constructed by Graham Walsh of that Canadian band. Elsewhere, Mike Haliechuk of Fucked Up, twins Josh and Jesse Hasko aka North America, industrial noise artist HUREN, and avant-garde singer Mary Margaret O’Hara contribute.

Total Time’s major appeal is its electronic mysticism and its throbbing psychedelic heart. Just give it time, totally.