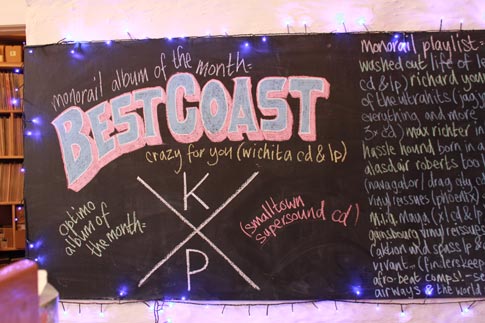 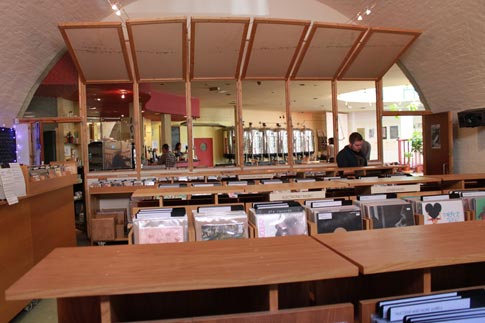 Every trip I make to a new city is inevitably anchored by a visit to that city’s record shops. Glasgow was no different. Mono or Monorail was our destination last Sunday as I accompanied Aoife on her food trip to Glasgow courtesy of Visit Scotland (extensively covered at her food blog – my god what bulging waistlines we have).

With the recent closure of Road Records in Dublin, music shops have been at the forefront of my mind and when you visit a new city, it’s often a barometer of what that city would have to offer if you lived there. Amongst all the arbroath smokies, fancy fish and chips, rabbit terrine, mackerel, venison haggis consumed we made a visit to Mono and as a record store and space it’s an example of what Dublin lacks.

Saving the record store as a concept is something that has been talked about for the last ten years; ever since Tower Records closed down in the US, ever since music became available digitally, ever since our own Road Records was in trouble. There is no doubt that to serious music fans, the loss of a physical place to purchase records and CDs is under threat. This is natural. As Olan from All-City remarked at a Banter discussion to Jim Carroll last year: “running a record store is like running an angling shop these days: the customers are all middle-aged men”. Record stores are like any other business. If people aren’t buying from them, they are simply not going to exist anymore. This is basic economics regardless of the affinity and rose-tinted glasses we don when the announcement of our favourite record shop closing occurs.

Now, I don’t know the financial ins and outs of Mono’s store in Glasgow but it looks like the owners are doing the right things. Firstly, the fundamentals. It’s a kickass record shop that has been open since 2002. For someone like me, who absolutely will never buy CDs ever again (they are cheap, plastic and ultimately crap), Mono is my kind of store. It serves a great selection of CDs too but the vinyl section feels like it’s tailor made for my tastes. A catalogue taking in new releases, indie, dance, dubstep, electronic, bargain 7″s, second-hand records and a comprehensive compilation section taking in African, South American, blues, soundtracks, oddities and obscurities, it has it all. I had no trouble finding purchases which is something that I cannot always say about Dublin. In the end, Aoife and I plucked for a varied selection: Best Coast – Crazy for You (Mono’s album of the month), a pretty import of Washed Out’s Life Of Leisure, a Factory Floor 12″ (I had an enthusiastic conversation with the guy behind the counter about their live show – supposedly exceptional), Iron and Wine’s Our Endless Numbered Days, Prince’s Purple Rain / 1999 12″ and some dirt-cheap 99p 7″s taking in Beck, El Guincho, Still Flyin’ and The Drums’ ‘Let’s Go Surfing’ (a song I’ve wanted on vinyl for a while). 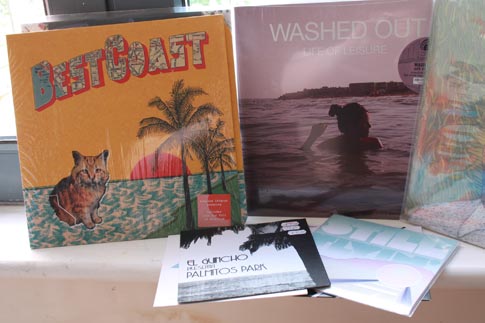 Secondly, Mono is not only a record store. It’s also a cafe, a bar, a free-exchange bookshop and a live venue housed across the road from another similarly awesome venue/cafe/bar called The Thirteenth Note. The cafe is veggie-friendly (menu) – we opted for hummous with pitta and and while we were there a clutch of locals were sat outside, soaking in the sun drinking from the taps provided by the in-house micro-brewery there. There was also a Mono ginger beer – always a winner in my book. There’s a stage in the building which last Tuesday saw Steve Mason ex-Beta Band perform there. Recently, Malcolm Middleton launched his album there to a full house. I should mention that the building has a glass dome in the centre which gives the whole floor light, far from a dank and dark typical record shop. 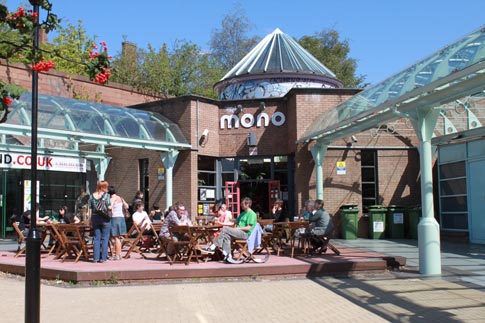 It’s an example of what Dublin sorely lacks. Maybe Road would still be around had it moved its premises and joined up with a cafe or bar? Plug’d in Cork announced plans to re-open in conjunction with Triskel Arts Centre in the city, giving further opportunities for the store to curate gigs and events in the space. Maybe, it won’t be economically feasible but just imagine how awesome it would be to have a place in Dublin city centre that houses a record shop, a cafe and a bar. Or even comics, a book shop, or a place that shows films. Tower is the best we’ve got at the moment and for an independently run large-scale record shop it does a great job but it’s not really a place to hang out and certainly you couldn’t have a Sunday brunch there. After visiting Mono though, a boy can dream. Dublin is a city I love but a Mono-style multi-purpose building would give this city a cultural place I think it deserves. If you’re ever in Glasgow, do visit.

A day trip into Shangaan Electro