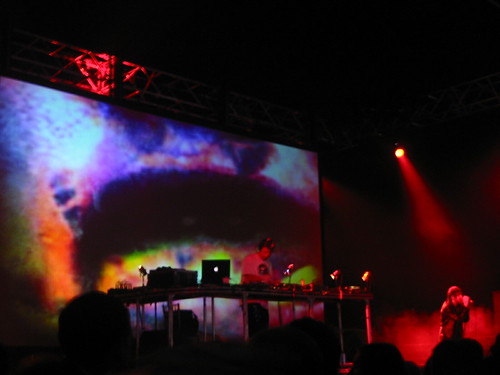 Normality is a hard thing to grasp after such an ecstatic weekend at Electric Picnic. The last festival of the summer came and went over the weekend (way too fast) with some amazing music and great memories. My body is sore, my throat is raw, I’m bloody tired but I wouldn’t swap it for anything. Almost all of the acts I planned to see, didn’t disappoint.

Spank Rock – Even without MC Amanda Blank, these boys rocked the Bodytonic tent and were the perfect start to the weekend. According to MC Spank Rock they’ll be back in November so keep an eye out.

Mogwai – Finally got to see them live. Mogwai fear Satan was great. Not as loud as I expected them to be.

Massive Attack – Infinitely better than Oxegen a few years ago. The sound at the Main stage was excellent and visually they were arresting. Unfortunately I had to leave early because I had some passing out to do 🙁

Messiah J and the Expert – Only caught the last 2 songs of the set but fair play to the lads for getting such a big crowd at 1pm on Saturday.

Broken Social Scene – Third time seeing them this year and still great. They were short of a few members but I thought they were brilliant. Ibi Dreams of Pavement live is transcendental and Anthem for a 17 Year Old Girl gets me every time.

DJ Shadow – Although I didn’t hear it directly from any one person, seemingly there was a lot of people who were very disappointed with his performance. I thought it was a fantastic upbeat set and I enjoyed it much more than his Ambassador gig a few years back. Hearing those UNKLE songs live, the presence of Lateef, Mashin on the Motorway and even those two new tunes that he played made it one to remember. The David Banner track Seeing Thangs was a high point and the visuals were also superb (See video below).

Super Furries Acoustic Bingo Set – Being the band I’ve seen more live more than any other , I gave their Main stage slot a miss but caught their entertaining Bingo set. Hearing B-side Foxy Music and If you Don’t want me to Destroy you again was first-rate.

Soulwax / 2 Many DJs – There was a great atmosphere in the tent for this. Nite Versions was great but the ultimate crowd pleaser is the DJ set. The Arcade Fire remix was a definite highlight!

Saul Williams – This man never disappoints. Such energy and inspiration.

Yeah Yeah Yeahs – It’s been said before but it’s worth repeating Karen O is a legend. One handed drumming for the whole show as well!

Modeselektor – Without a doubt, my favourite act of the weekend. Finishing up the Foggy Notions stage on Sunday with a banging banging set, the atmosphere in the tent was electric. When they dropped Kill Bill no. 4 the place blew up. Amazing.

Missing Jape AND the Rednecks.

Passing out in my tent before Massive Attack was over.

That head-wrecking Jet thing outside the Bodytonic tent.

DJ Shadow breaks it Down