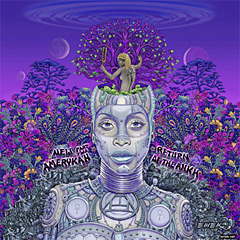 Erykah Badu’s New Amerykah Part Two: Return of the Ankh has just been released. Less politically-minded than Part 1: 4th World War, it is more focused on matters of the heart. Overall, It is also more deeply rooted in the R&B that Badu is known for rather than that album’s finger-clacking hip-hop crossover with more live instrumentation and raw emotion throughout.

Producers this time around alongside Badu are Karriem Riggins, 9th Wonder, Madlib, J Dilla, Georgia Anne Muldrow and James Poyser. You may have heard or seen the brilliant jam ‘Jump Up In The Air and Stay There’ which features Lil Wayne. That tune is a red herring as oddly, it only appears as an iTunes bonus track . I guess the straight-up Outkast hip-hop style doesn’t really fit in with the rest of the album.


‘Window Seat’, which debuted in provocative video form last week showing Badu disrobing in the street (see below), is more indicative of the album’s style. Mix that candlelit-studio vibe in with funky piano riffs, a smidgen of Badu’s ambient approach to the R&B genre and a general laidback feel and you’ve got a very different Amerykah altogether. That’s a good thing – this is the ying to the yang of Part One – a breath of fresh air that blows at it’s own pace.

MP3: Erykah Badu – ‘Jump Up In The Air and Stay There’ feat. Lil Wayne