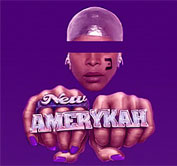 Erykah Badu is finally following up her New Amerykah Part One: 4th World War with Part Two or specifically New Amerykah Part II: Return of the Ankh. The album is due out at the end of March and features production by Badu and people like Madlib, J Dilla, Shafiq Husayn of SA-RA Creative Partners and Georgia Anne Muldrow.

Last week, ‘Jump In The Air’ featuring Lil Wayne a track that was purported to feature on the album but now is only a web-only cut leaked in high quality. If this is a bonus cut, Part II is now even more anticipated.

If the videos disappears from Youtube, there’s a Flash video with the song on Badu’s site.