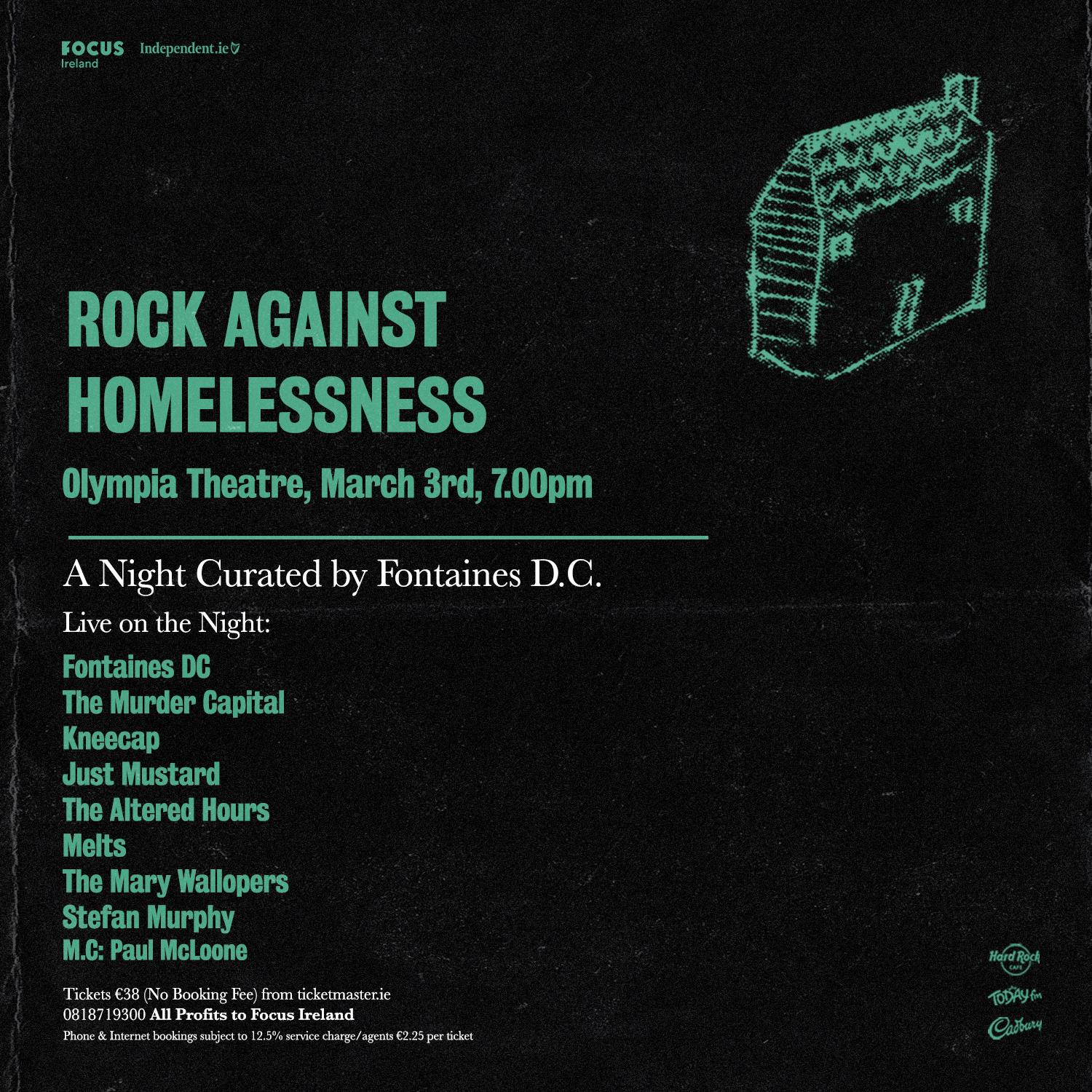 Fontaines D.C. have curated and will play a special gig at the Olympia Theatre on Tuesday March 3rd in aid of Focus Ireland.

The band will be joined on the night by The Murder Capital, Kneecap, Just Mustard,The Altered Hours, Melts, Stefan Murphy and Mary Wallopers. The night will be MC’d by Paul McLoone.

Rock Against Homelessness is being supported by various companies like Cadbury and Hard Rock Café and organisations and has the title sponsorship from Independent.ie

The housing crisis has become an issue that affects many in modern Irish society and was one of the central topics of the upcoming election. Right now, there are 10,500 people who are homeless in Ireland and almost 4,000 of them are children. The vast majority of people who are homeless are staying in emergency hostel accommodation, or are families living in cramped hotel rooms with inadequate facilities for their children’s development.

In response to this national crisis, Rock Against Homelessness in aid of Focus Ireland, in association with Independent.ie, has been announced for The Olympia on March 3rd. The gig is curated and headlined by Fontaines D.C., one of the most electrifying bands to emerge from Ireland in recent years. It will be MC’d by Today FM’s Paul McLoone, and other great acts playing on the night are The Murder Capital, Melts, Kneecap, Just Mustard, The Altered Hours, Stefan Murphy, and The Mary Wallopers. In addition, both Cadbury Ireland and Hard Rock Café have come on board as proud sponsors for the event.

Focus Ireland CEO Pat Dennigan said: ‘There are now nearly 4,000 children who are homeless in Ireland and it is truly shocking that three families – and some individuals – become homeless every single day nationwide. This is unacceptable and wrong and we are working with families and individuals to help them. In such a crisis, events like Independent.ie’s Rock Against Homelessness really help to shine a spotlight on the issue and also raise vital funds for our services to support people who have lost their homes and to prevent others losing their homes in the first place.’

He added: ‘We are delighted that Fontaines D.C. are headlining the concert this year on March 3rd in the Olympia Theatre. It is going to be the gig of the year with lots of other top acts lined up and it’s a great way for people to help to support the work of Focus Ireland while also having a great night out.’

Peter Vandermeersch, publisher of Independent.ie, said: ‘A news organisation like ours obviously reports and analyses the news, but we try to do more than just stand at the side line of events. We feel responsible for our society and we want to support the less fortunate people in it. That’s why Independent.ie’s Rock Against Homelessness is such a crucial event for us.’

Fontaines D.C. will play a 30-minute set on the night which is bound to be a stormer, as the band have been garnering accolades at home and abroad for their boisterous live performances.

Commenting on the partnership, Eoin Kellett, MD Mondelēz Ireland, said, ‘Cadbury are thrilled to be supporting Rock Against Homelessness again this year. We got involved in the initiative for the first time last year and we were truly inspired by what we saw. From the organising committee and bands, to music fans in the audience, everyone was there, first and foremost, to support a very worthy cause. I would urge anyone to buy a ticket to what will be a great night out, knowing that their money is supporting someone in need.’

Said Group Marketing Director of Hard Rock Cafe, Celine Gilmer, ‘The ethos of Hard Rock Café has always been driven by live music and our strong philanthropic philosophy, backed by a genuine ambition to support both local and international rock acts. Our signature series merchandise and the Hard Rock Heals Foundation aim to raise awareness & funds for our charity partners, and we also believe that music has the power to heal! When the opportunity came up for us to be a part of the Rock Against Homelessness gig, there was never any doubt that we would lend our support. We are so proud to support a cause as important as the homeless crisis in Ireland, and we invite everyone to rock out with us in the Olympia Theatre on March 3rd.”