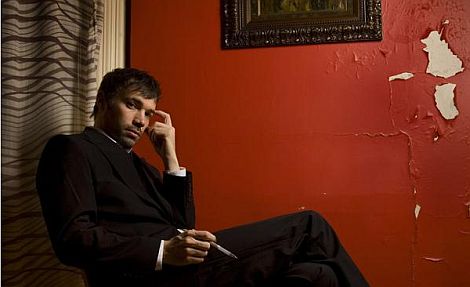 In anticipation for the forthcoming new Buck 65 album – Situation out on September 18th, Here’s something I missed completely. Almost a year ago, Buck offered a mixtape called Strong Arm for download on his site. Well in October of 2006, he offered another free download, this time an EP entitled Dirty Work.

It felt important to me to get some work out there that was 100% mine. It’s been a while. I’ve been working with others for some years now. The last album was done almost entirely with Tortoise and the next album is a major collaboration as well. I’m very happy with all the recent efforts, but I was itchy to get back to good, old-fashioned beat-making.

I remember reading an interview with Buck somewhere in which he enthused about a John Fahey album he couldn’t stop listening to. It sounds like Fahey has become a bit of an inspiration for the new album judging by this song on Analog Giant and Rebel (Acoustic Version) below and on his myspace.

It seems to be a fruitful time for Buck as he produced the song below for Sage Francis recent album Human the Death Dance and has started a new project called Bike for Three!. He’ll be in Ireland on the 23rd and 24th of July for Galway / Dublin dates respectively.

Sage Francis – Got up this Morning