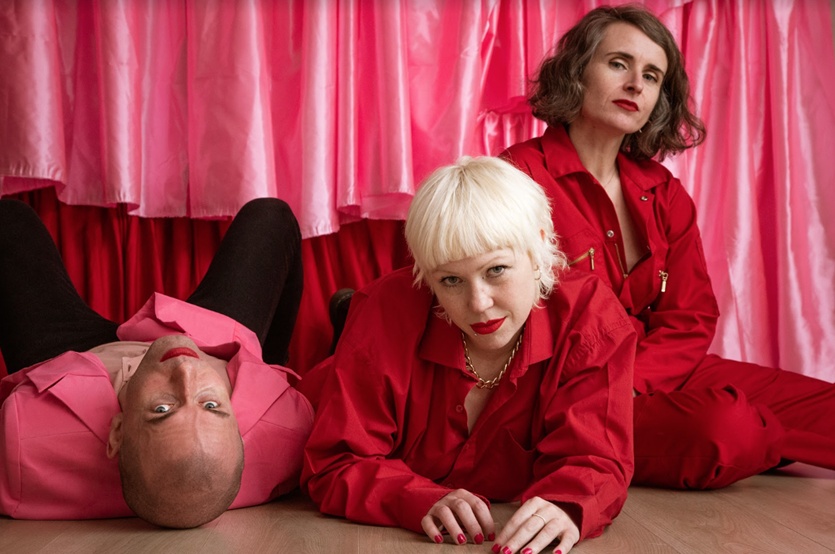 Grave Goods are a new alt-rock and minimal post-punk-influenced band featuring members of Girls Names, September Girls and PINS, based between Manchester, Belfast and Dublin.

We previously featured the band’s debut song ‘Come’, a claustro-rock tune with punky guitars and drums.

A debut album called TUESDAY. NOTHING EXISTS. is out September 9th via TULLE Collective, the label run by Fears’ Constance Keane.

Today, the band released a new song ‘Source’ that leans into the minimal rhythmic patterns of the band, who say of the song…

’Source’ is about rewriting narratives that have been pushed on us with something more real and meaningful. The perceived limits of our gender are fictional, we are unique.

The video was made by singer Lois Macdonald, using Max MSP to create a virtual environment, as well as pre-existing live footage of the band (recorded by IMPATV at Islington Mill in Salford), plus imagery of opulent deserts and random real life footage, then she programmed 3D shapes to inhabit the space to create visually exciting chaos.

About TUESDAY. NOTHING EXISTS.:

Lois: “We wanted the sound to be minimal, uncomfortable, unusual, angular, abrasive.  We wanted to challenge ourselves to make something different, and not worry about conventional song writing.  When Writing there is a lot of communication and small changes until everyone is happy with their parts. We try every idea.  I like to think we write with the intention of giving each instrument space, and not being afraid to play nothing.”

“We live in different countries so we would meet up a few times a year and do a few days of intensive writing, then take the ideas away and work on them.  We usually meet up in Dublin, Sarah takes us in and we spend the whole time in the practice room getting as much done as we can.”

Sarah:” Lois and I were chatting about the music we are interested in after a gig we played in San Diego, where my former band supported her band. Lois mentioned she wanted to visit Dublin again so I invited her to come visit and also to work on some music. I feel like when we started writing the music initially, it was just for enjoyment, to make the kind of music we were interested in listening to and it developed really naturally. On the first day we got together we wrote four songs, ‘Come’, ‘None’, ‘Miles’ – I can’t remember the last one, which we performed at a house party later that night – our first gig, kind of. I think for me it was after playing in front of people that I felt, ok we’re making this music for our own enjoyment, but it definitely needs to be shared. So, we continued to work on the structures of the songs, shared ideas, tried ideas, worked on new stuff and ended up with a body of work.  I think we all come at the process differently, I feel the music comes first as that’s the bit I know how to do.”

Lois: “This album was penned pre-pandemic. I was obsessed, and still am, with ‘Nausea’ by Jean Paul Sartre. It’s my bible. It summarises our existence. It is everything and nothing.”

“The album’s lyrics are all exploring existential philosophy.  I had been reading a lot of Sartre, Camus, de Beauvoir and I couldn’t get enough. Everything I was reading made me feel excited and exhilarated, and overwhelmed at the same time.  I became obsessed with Nausea by Jean-Paul Sartre and read it over and over again and took it everywhere with me.  I felt like someone had written down how I see the world and I found it a comfort to always have it there.”

“To me most of the songs are about how everything is pointless so everything has complete meaning, and only you know what that is for you.”

“We recorded at Invada Studios in Bristol, and I feel the Pandemic has added another context to the concept of the album.”