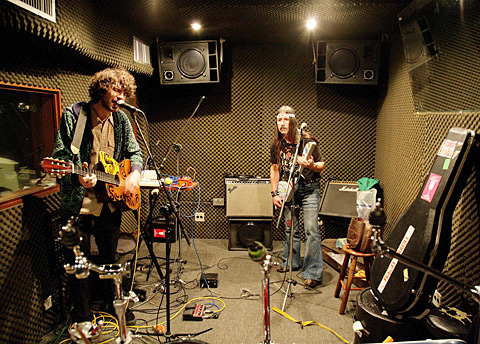 Gruff Rhys has hooked up with Brazilian TV and VCR repairman Tony Da Gatorra for an album called The Terror Of Cosmic Loneliness to be released in July.

Gruff tracked down Tony, a cult hero for the filming of the documentary Separado! in South America. Having met, the pair played their first gig together and then booked into a studio in Sao Paulo for rehearsals. Tony Da Gatorra is a musical freedom fighter and the inventor of his own unique ‘Gatorra’ instrument. Part drum machine, part guitar, the Gatorra provides the unique sonic style of Tony’s peace-loving protest songs and features heavily throughout The Terror Of Cosmic Loneliness.

We spent 5 days rehearsing a set of songs to play live at the venue – our only shared language was music itself so there was no small talk, just intense concentration on the music. On the final day, as the rehearsals had been so productive, we hooked up some recording equipment and took about 5 hours out to make this record. We recorded several live takes of each song then chose the best versions. I added a harmony vocal overdub on two songs, otherwise it’s pretty much what we recorded at the time. Upon returning to Cardiff I took the songs to producer Kris Jenkins’s studio whose excitement for the album and general encouragement was infectious – then we called in noise legend Sir Doufus Styles to oversee the final mix. Armed with 5 flasks of strong coffee, 75 sticks of gum and a bank of vintage compressors we mixed The Terror Of Cosmic Loneliness at extremely loud volume in one epic 12 hour session.

Hello, peace my brothers, this record was made with lots of feelings and true love to bring consciousness and show a little bit of truth that needs to be said without hypocrisy. We are creatures of God, so there’s no death. Spirit is light, all evil won’t prevail – there’s no evil when it crashes with goodwill.