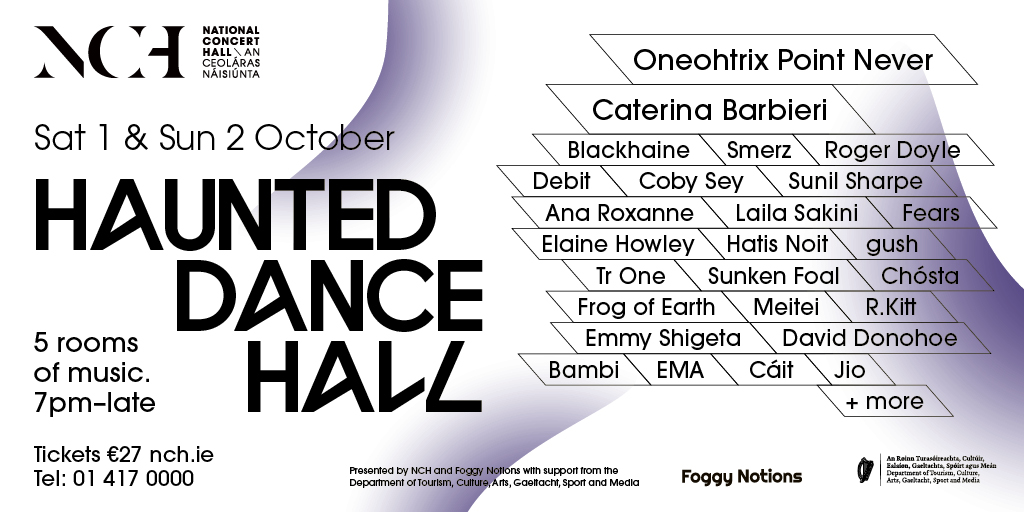 A Red Bull Soundclash is coming to the RDS this October

Over 40 artists are lined up to play are drawn from the adjoining worlds of electronic, contemporary classical, ambient, hauntology, noise and experimental music perform in five different rooms throughout the National Concert Hall over two days from 7.30pm to late, including:

Tickets €27 On Sale 10am Thursday September 8th. Tickets for Haunted Dancehall include all rooms on the night. Food and drink will be available. Full breakdown and schedule below.

More from the presser:

The festival sees the much-anticipated return of Oneohtrix Point Never (aka Daniel Lopatin) (Sun. 2nd October 8pm) – the Mercury Prize-nominated Brooklyn-based producer – to these shores. As well as releasing a slew of critically-acclaimed albums, Daniel has collaborated with artists such as James Blake, Ishmael Butler, Iggy Pop and Rosalia and his production credits include The Weeknd, FKA Twigs, David Byrne and Nine Inch Nails among others.

Making her Irish debut, Italian composer and musician Caterina Barbieri (Sat. 1st October 8pm) presents her new live show The Spirit Exit on NCH’s Main Stage. Listening to the Italian composer and modular synth virtuoso has felt like traveling at light-speed and slow-motion all at once since 2017’s breakthrough double-album Patterns of Consciousness. With her new project, Barbieri has delivered her most profound work yet —a journey through inner-space as vast as a universe and as intimate as a heartbeat.

Haunted Dancehall is a project supporting the work of the Night-Time Economy Taskforce and sees the National Cultural Institutions collaborate with more diverse partners and open up the spaces to new artists. Haunted Dancehall is supported by the Department of Tourism, Culture, Arts, Gaeltacht, Sport and Media to drive and encourage diversity in the Night-Time Economy.

: “Using our iconic spaces in new ways is key to encouraging diversity in the Night-Time Economy and is a vital part of the work we are doing in my Department to boost and support the Night-Time Economy. The team at the National Concert Hall is really pushing boundaries with this exciting new festival – opening later, using this famous landmark building in new ways and programming and curating in different ways, focussing on the most exciting new music-making both from Ireland and internationally. This event is supported by my Department as part of the implementation of the Report of the Night-Time Economy Taskforce and I hope to see more of this in the future. I would like to thank the NCH team, their partners, independent promoters Foggy Notion and also Give Us The Night for their input and for consistently raising the issue of access to venues for new music throughout the work of the Taskforce”.

Festival highlights include Blackhaine (aka Tom Heyes) (Sat. 1st October 9.30pm) who combines drill rap, experimental music and contemporary dance for his intense live show. His debut EP Armour and its follow-up When Salford Falls apart have been met with widespread acclaim.

The Guardian’s Global Album of the Month honouree Delia Beatriz aka Debit (Sun. 2nd October 9.30pm) will weave her avant-garde and drone modes into experimental dance music in the NCH for the first time. Her lauded album, The Long Count, utilises digital instruments and harnessed machine learning based on research into Mayan wind instruments to compose music that feels completely out of time.

The Godfather of Irish Electronica Roger Doyle (Sun. 2nd October 9.30pm) leads the domestic contingent at the festival. Known for his pioneering work as a composer of electronic music, Roger has worked extensively in theatre, film and dance, in particular, with the music theatre company Operating Theatre, which he co-founded with the actress Olwen Fouéré. Babel, his magnum opus, which took ten years to compose, was released on a 5-CD set in 1999, and contains 103 pieces of music. A feature documentary film has just been made on him, directed by Brian Lally, called The Curious Works of Roger Doyle.

Tickets for Haunted Dancehall include all rooms on the night. Food and drinks will be sold throughout the venue on the evening.

A Red Bull Soundclash is coming to the RDS this October