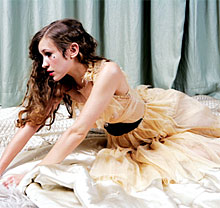 Drag City are streaming ’81’, just one of the many, many Joanna songs heading our way in the next month. The triple album Have One On Me is released here on February 19th (UK/Europe – 22nd / US – 23rd). More details.

’81’ on the right sidebar on the page. The site is taking a hammering at the moment so it may not load straight away. It reminds me of Ys material but reports and videos suggest it’ll be a mix of the sounds of both her albums.

The Middle East – The Darkest Side