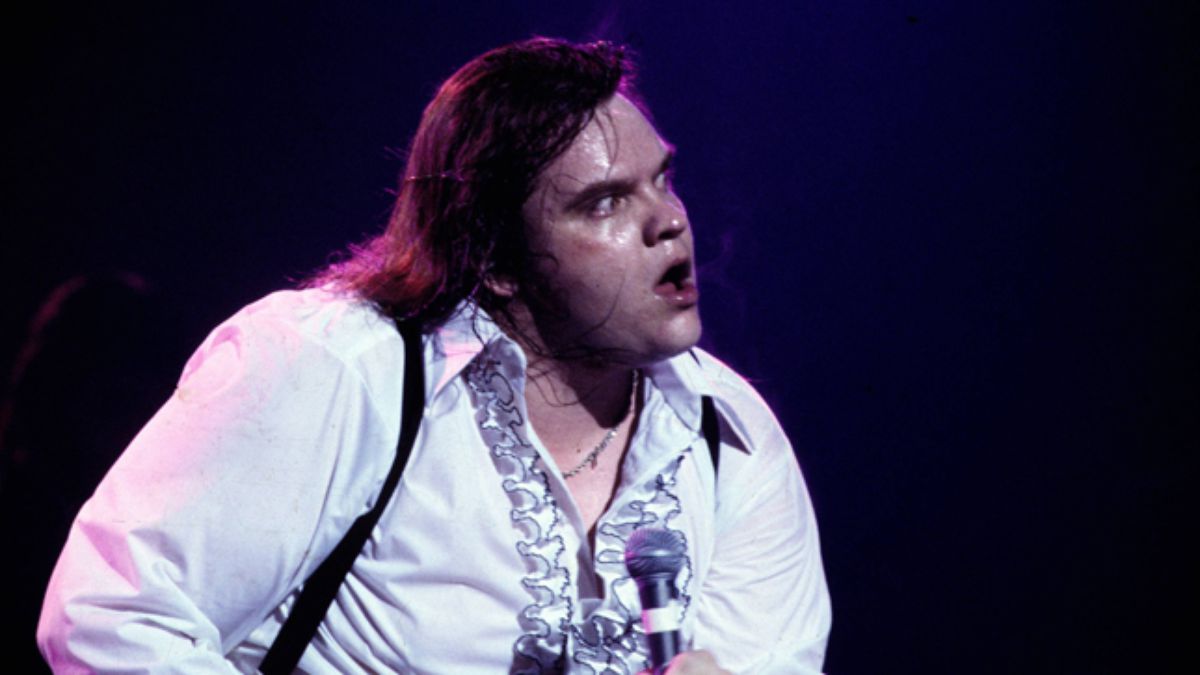 Ronan Casey has a great story about Meatloaf playing a tour of rural Ireland when he was down on his luck in the late ’80s.

All the gigs were stuffed and over-capacity such was the local excitement of having a major star in the town to perform.

One gig in Moate in Westmeath was particularly rowdy and things got heated….

Two or three songs into the gig, and the pressure was building up at the front.

“Please guys, can you move back a couple of steps?” pleaded Meatloaf as he finished ‘You Took The Words Right Out Of My Mouth’ to an audience on the move, horizontally and vertically. “Someone’s gonna get hurt.”

About six people heard him. The rest of them were either screaming for the hits or trying to finish their cans of Fosters which, alongside Harp, Hoffmans and Furstenberg was the stable tinned lager at Irish gigs of the time. I was being crushed down the back, my previous gigging experience limited to seeing Mamas Boys, Christy Moore and, of course, local hero Joe Dolan.

The gig carried on, and more and more people swelled the already packed Community Centre. As this was a local gig for the tour promoter there was no way he was refusing anyone from his neck of the woods, particularly if they arrived at the door brandishing cash.

Ear­lier in the tour Meat had assigned a new role to my tour man­ag­ing pal Marty – to pro­tect him, to be his body­guard. Marty told us he’s “take a bul­let” for Meat­, such was his love of the big man’s music.

As the Moate gig stepped into gear, Meat Loaf’s new body­guard sensed that the man him­self was about to explode. He had erupted a few times over the past few nights. Marty moved into posi­tion on the side of the stage to reas­sure Meat that every­thing was O.K. He liked reas­sur­ances, did Mar­vin, and my friend Marty was just the man to give them to him. But the crowd was far from reas­sur­ing.  Empty beer cans began to be hurled around the venue. Some clanged off the side of the stage.

With the gig still building momentum, a lone Dr. Marten boot broke the imag­i­nary wall between per­former and audi­ence and landed on stage.

Now, in his pre­vi­ous arena-filling life, Meat­ Loaf was more accus­tomed to fren­zied females fever­ishly whip­ping off their panties before launch­ing them towards the stage. He was no stud, but as his sweaty arena show reached its peak there seemed to be no stop­ping more excitable female audi­ence mem­bers. But there was none of those in rural Ire­land tonight.

A few moments later another item of men’s footwear landed on stage, fol­lowed inter­mit­tently by sev­eral other items of cloth­ing, none of which resem­bled silk panties. Meat­ Loaf was hav­ing none of it.

“Stop fuck­ing throw­ing things!” he roared, the glare in his eyes adding the nec­es­sary ‘or else’. The crowd didn’t care. Beer cans, glasses, bot­tles and what­ever else was get­ting in the way of the increas­ingly crushed audi­ence began to arrive on stage at var­i­ous inter­vals before, dur­ing and after songs. The odd unfin­ished cigarette also came up. As a junior smoker at the time who was well accus­tomed to shar­ing cigs with my pals (in fact it was the norm) I thought this was an affec­tion­ate ges­ture for Meat­ Loaf to take a drag. Not so.

“I’m fuck­ing leav­ing here man,” Meat­ Loaf roared, to Marty by the side of the stage.

A white run­ner boot, its path to the stage illu­mi­nated by the arc of a spot­light, then hit the star turn.

“Fuck you!” Meat­ Loaf roared back, and he promptly stormed off stage, micro­phone drop­ping to the floor in a screech of feed­back. The band – a bunch of hired hands most likely on wages as poor as the food through­out the tour – were not yet fully com­pe­tent in read­ing Meat Loaf’s sig­nals, and they played on. Was this a cos­tume change? “I dunno, I’m only the drummer.”

Back­stage in the nar­row hall­way which tre­bled as dress­ing room, load-in point and back­stage area, Meat­ Loaf was fum­ing. Like the band, the crowd hadn’t yet realised he’d stormed off stage so not only did his grand exit not achieve the desired effect, but most peo­ple there thought it was part of the show.

Supremely pissed off, he reluc­tantly went back on to about a thou­sand roars for Bat Out Of Hell.

As more debris rained on stage, Meat­ Loaf warned the crowd that he would “walk out the fuck­ing door” if they con­tin­ued this sort of carry on.

“I’m fuck­ing warn­ing you,” he roared as the band broke into Dead Ringer For Love, one of Meat’s biggest Irish hits and one guar­an­teed to send the crowd doolally, “one more thing lands on this stage and I’m leav­ing.”

A cou­ple of cans flew around the venue, but none landed on stage. They were joined in their flight by a cou­ple of shoes and sneak­ers, only one of which landed on stage. But, fair play to him, Meat Loaf held firm, though the threat of storm­ing off stage was still very real.

Attempt­ing the unen­vi­able task of pro­tect­ing Meat­ Loaf from debris and hold­ing the crowd back was my pal Marty. He was stand­ing in the pit directly on front of the stage, swat­ting beer cans when sud­denly, every­thing in the com­mu­nity cen­tre went into slow motion.

Marty recalls: “The lights caught some­thing shiny and a sec­ond or two later I saw it. I thought ‘oh no… this is it… show’s over’…”

Fly­ing through the air was… a wheelchair.

The chair flew directly over Marty’s head. He turned just in time to see Meat Loaf’s eyes swell with an unusual mix­ture of both fear and won­der. The burly singer put out an arm and attempted to step back. The stage was so small he stum­bled into the drum riser just as the wheel­chair crashed onto the boards in front of him. In slow motion the big man appeared to fall, the empty wheel­chair bounc­ing to his left, one wheel com­i­cally spinning.

Marty remem­bers the crowd cheer­ing. He was sure he could make out some­one scream­ing, but by the time he could react Meat­ had got­ten to his feet, grabbed the mic, roared at the audi­ence and hurled it at them as he stormed off.

How­ever, the lead of the mic was too short and it hit the advanc­ing Marty, whose own incredulity at what had been launched onto the stage had pre­vented him from get­ting up there sooner. As he climbed onto the stage the band were already leav­ing it. The show was not even a half an hour old.

As he arrived back­stage to find Meat­ Loaf ablaze with swear­words, anger and American hand-gestures, Marty decided to let the con­cert pro­moter do the talk­ing. There was no way Meat­ Loaf would return to the stage. “No fuck­ing way!” said the big man. “Not after what they did to that poor kid in the wheelchair.”

“Christ!” thought Marty. “Who was actu­ally in the wheel­chair?” There was no way of know­ing if there was a poor kid, such was the vol­ume of peo­ple within the Com­mu­nity Cen­tre, and there was no way Meat­ Loaf was going back in front of them to find out.

The lairy audi­ence began to get even more rest­less. A riot – unheard of in rural rock­ing cir­cles, though another pal of mine swore blind his emi­grant brother was at a Dio-era Black Sab­bath gig in the states when one broke out – was almost cer­tainly on the cards.

Despite pleas that return­ing to the stage would calm the rest­less natives, Meat­ Loaf stormed out of the venue towards his bus, his band and entourage close behind in a show of sol­i­dar­ity and strength. The pro­moter, his entourage and my pal Marty tried to rea­son with him, but to no avail. Out of the blue, an angry man in a denim jacket appeared.

Could he be linked to the wheel­chair? Er, no.

“Get back on that stage ya bol­locks,” he roared at Meat­ Loaf, as he stormed over to him, arm coil­ing up to his side. “We paid good fuck­ing money to see you!”

The man went for Meat­ Loaf. Would Meat­ Loaf go for him? The man’s fist looked deadly. He raised it back and pushed it out. Act­ing on instinct, my pal Marty dived in to pro­tect Meat­ Loaf. He was, after all, on secu­rity detail.

Again, every­thing sud­denly went into slow motion. Marty’s feet left the ground as he launched him­self into the air. As his face flew into view and blocked Meat Loaf’s head, the irate audi­ence member’s fist stuck, con­nect­ing with his nose. Blood spurted loose as Marty com­pleted his dive and landed on the tar­mac.

Meat Loaf’s own peo­ple man­aged to get their man out of the way and within sec­onds he was on a bus, bound for the hotel. My pal Marty lay on the ground, his nose bro­ken, but no injury could dent his pride at ‘tak­ing a bul­let’ for Meat Loaf.

The tour resumed in Car­low the fol­low­ing night, where Meat­ Loaf per­son­ally thanked Marty for inter­ven­ing the night before. Secu­rity was tight­ened up con­sid­er­ably, with a load of army and hardy FCA (local defence force) boys drafted in on the promise of free tick­ets, a cou­ple of cans and a few bob, and for the first time on the sold-out tour, ‘house full’ signs were erected and the door­men said no.

Secu­rity was even tighter when the Quo did the same tour (minus a few of the sheds) a year later. 20 years later and my pal Marty’s nose is a crooked bro­ken mess, a side­ways Manilow, but he’s a proud man and to this day he calls the nose ‘Meat Loaf’ in hon­our of the man for whom he took a bullet.

A lit­tle over a year later and Meat­ Loaf was back in the are­nas. He rekin­dled his part­ner­ship and friend­ship with Jim Stein­man and together they penned Bat Out of Hell II: Back into Hell, an album which spawned I’d Do Any­thing for Love (But I Won’t Do That), a song that got to num­ber one in 28 coun­tries.

My pal Marty likes to think that the unspo­ken ‘that’ in the hit song refers to steal­ing someone’s wheel­chair, and throw­ing it up on stage.

This feature was originally published by Ronan Casey in 2017. Ronan is the author of Joe Dolan: The Official Biography. The blog is now offline so it’s republished here.