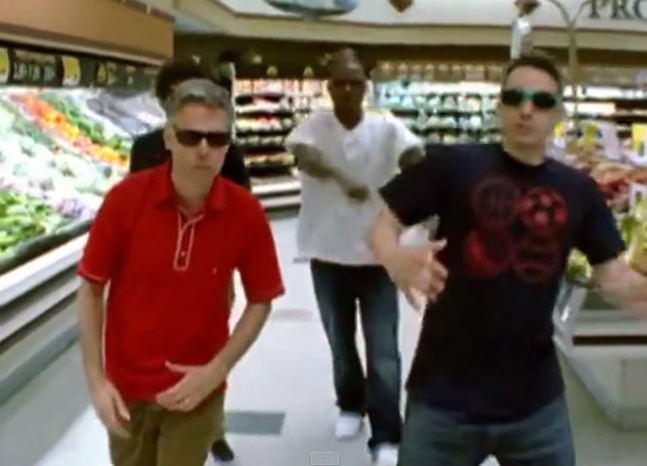 DENA – ‘Another Love’ (production by Mocky)

‘Too Many Rappers’ is a Beastie Boys song that appeared on Hot Sauce Committee Part 2, the band’s final album before MCA passed away. A different version of the song was released as a single in 2009 and Roman Coppola directed a video in 2010 at the band’s Bonaroo show in 2009 that would end up being the band’s last ever live show. The video was never released.

Until now. Beastie fan and videographer Eoin McLernon, an Irish English and New Media student stumbled across it on. He explains how he found it:

While travelling by bus from the city of Limerick via my native Clare to another city Galway, I was watching a Beastie Boys video on my iPad. Specifically, the video for the single ‘Don’t Play No Game (That I Can’t Win)’ featuring Santigold. While watching the end credits for the music video a particular name caught my eye. That name was Neal Usatin, a producer and video editor. I had seen this name on previous Beastie Boys productions and projects made by the late Adam Yauch’s film distribution company, Oscilloscope Laboratories. Intrigued, I decided to Google Neal in order to find out about more of his work. This led me to his website “sweetcutz.com” which featured his online résumé. Curiously, this curriculum vitae included a credit for work on a 2010 video for the Beastie Boys single “Too Many Rappers ft. Nas,” directed by Roman Coppola. Further research led me to Neal Usatin’s Vimeo uploads, and lo and behold, there it was, the fabled lost video which us Beastie fans have lusted after for the past five years. I cannot begin to describe the nervousness and emotion I felt as I loaded the video and watched it for the first time. It existed and was sitting online in its entirety for years, unbeknownst to our tight-knit community of fans.

As soon as I arrived in Galway, I made my way to a friend’s house to celebrate his birthday. I had one goal, to reach a stable internet connection and share this new video with my fellow Beastie Boys fans via the band’s official message board. As soon as I did so, I started to receive a huge influx of Facebook friend requests and forum replies and Facebook messages thanking me for my discovery. My phone did not stop buzzing all night as I had a few casual drinks with friend’s to celebrate the aforementioned birthday. The response from the fans has been overwhelming, as this is possibly the biggest Beastie Boys related news since the tragic death of founding band member, Adam ‘MCA’ Yauch, on the 4th May 2012. This has certainly been among the most exciting 24 hours of my life of the past few years. I’ve even been offered money and a kidney if I ever need it by one fellow fan! It was also suggested that I make my way to New York this coming summer for MCA DAY 2015. Attendance at such an event would make my year! The video is better than I could have possibly imagined as it contains some emotional scenes from the group’s last ever live performance at the Bonnaroo music festival in 2009.