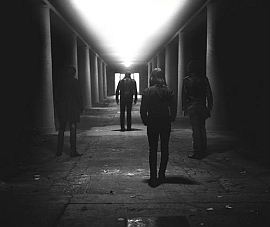 Four years after they recorded their debut, Humanzi are back. Tomorrow sees the release of their second album Kingdom of Ghosts, an album long in gestation. The band decamped to Berlin for the last couple of years and the result of that city’s surroundings bears down on this record. After the band endured a perhaps unfair critical backlash, it seems they’ve come out of it stronger and more resolved.

Kingdom of Ghosts is certainly a darker record, a grittier record, a more unique record. It still draws from Humanzi’s classic rock and roll influences but there’s a greater depth here. It’s reminiscent of the likes of War Stories-era UNKLE and Queens of the Stone Age. No bad thing in my book. It is defined by Shaun Mulrooney’s seething, bellowing delivery and the fact that the band are clearly much more at home playing their instruments than ever before. It’s not arrogance, it’s belief in their abilities and it permeates the whole record. The big-sounding production (by Rob Kirwan) does a great job of showcasing this expansion. The album is out on The Firstborn is Dead recordings. Listen to the first song from the album ‘Hammer’ and watch a documentary of the making of the album after the jump.