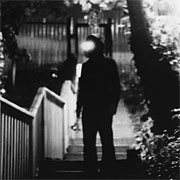 This is a video preview featuring tracks from Hunter-Gatherer’s brilliantly-titled album I Dreamed I Was A Footstep In The Trail Of A Murderer out in the early days of next month.

Here’s the title track from the album, the one where that bug-eyed freak from above is chasing you through the deserted post-apocalyptic streets of Ranelagh.*

* – I may have watched too many zombie films lately.

Vote in AU’s Irish albums of the decade poll

Irish hip-hop needs a kick up the arse