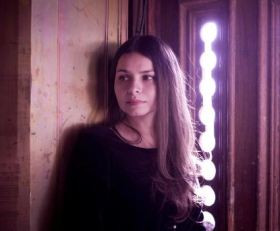 The Power of MAP

“Because not everything music bloggers get sent is total shit.”

This time around – Dam Funk, The Do, new material from Hope Sandoval (pictured), Cass McCombs, a White Lies remix, The Phenomenal Handclap Band and a friendly Fires mashup.

The Dø are an oddball Finnish/French duo who despite not singing in French have found success in the charts there. Their album A Mouthful is an eccentric collection of songs with a fairly mainstream heart. It’s the voice of Olivia B. Merilahti which bends it towards something more intriguing.

A sample from Dam Funk’s forthcoming EP entitled LAtrik which takes that ’80s boogie funk/’90s g-funk vibe to the max. How could you not roll to that? The dude is working on a full-length called Toeachizown which is a “modern funk” album in five parts. Look out for a Twisted Pepper date soon, if rumours are anything to go by.

Dam Funk – On and On

It’s a name I haven’t uttered in a while. Indeed, this blog didn’t exist when Hope Sandoval released her last album Bavarian Fruit Bread back in 2001 (!!). So it’s good to hear the former Mazzy Star singer will be returning with Through the Devil Softly in September. It was recorded in California and… the Wicklow mountains! Nice. Colm O’Ciosoig is the other half representing The Warm Inventions.

Cass McCombs is already a name familiar to many and he’s close to the heart of a small core of Irish music fans. With his fourth album Catacombs, he’s released what many consider to be his pinnacle. ‘Dreams Come True Girl’ features an awesome vocal from 64 year old Karen Black, the actress in Five Easy Pieces and Easy Rider.

Today the Moon, Tomorrow the Sun are an interesting indie-electronic outfit from ATL in the USA. However we’re here to big up this Free Magic remix of their tune as it’s rather nice.

Apparently White Lies were dancing to my DJ set at Oxegen. Pity I didn’t drop this or the epic Chase and Status remix of the same track then. There are a lot of epic sounding dubstep-sounding remixes knocking about at the moment. This one is a straight-up electro though.

Did anyone see The Phenomenal Handclap Band over the weekend? It’s a trick question because then you have to explain why you weren’t watching me DJ in a shed at the same time..

A band from Birmingham called Deluka have nicely mashed up their own song ‘Cascade’ with Friendly Fires’ ‘Skeleton Boy’.