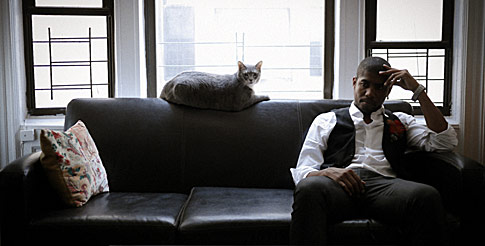 That’s Algiers own all-encompassing description of themselves. There’s truth to it. The band’s debut single ‘Blood’ is gripped by the dark hand of voodoo, a “slave-folk incantation”, a stumbling dystopian walk through a dusty monochrome post-world purgatory, complete with clattering chains and foreboding shadows. It sounds like an exorcism. A howl at the moon.

Algiers are from Atlanta but based in London/New York and consist of Franklin James Fisher, Ryan Mahan and Lee Tesche and according to them, they started recording songs in 2007. Their debut 7″ is available via Double Phantom.

‘Blood’ is backed with the equally tense ‘Black Eunuch’ which is filled with fiery twisted noise reminiscent of TV On The Radio and you can hear that below. This is really exciting. Watch the vid, check the 7″ tracks.