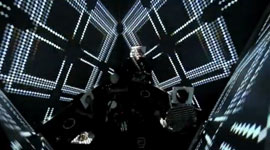 I haven’t seen too much about Apparatjik yet considering the spectrum of people involved apart from some coverage on music blogs and online magazines (and Day and Night last week).

It’s an odd one as the band are essentially a supergroup made up of Coldplay’s Guy Berryman, A-ha keyboardist Magne Furuholmen and Mew singer Jonas Bjerre. The resulting music is pretty much better than all their bands combined, certainly more interesting anyway. The Quietus debuted this live video from Berlin of the band performing ‘Snow Crystals’ inside a cube with Silent Shout-esque visuals. They have an album called We Are Here too. Interesting stuff and the songs ain’t half-bad either.