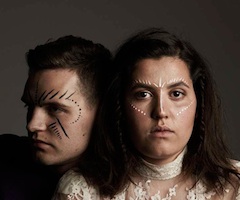 Danish band Quadron specialise in soulful silky-pop with an emphasis on the soul and pop. They are Robin and Coco and if you dig Lykke Li’s brand of Scanadavian pop you may very well dig these guys too.

Producer Robin Hannibal was worked with Aloe Blacc, Buraka Som Sistema and Omas Keith of Sa-Ra Creative Partners while 21 year-old Coco has sang for the producer collective Boom Clap Bachelors of which Hannibal is part of.

Their recent self-titled record was released in Europe last year and it’s getting a Stateside release in March on LA label Plug Research. Soul Clap!

The return of Gil Scott-Heron