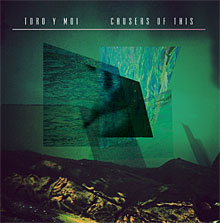 I had seen the name around and heard snatches of music for the last few months but a whimsical eMusic purchase led me to download Toro Y Moi’s Causers of This and it was a great impulse decision. As it turns out I posted his cover of Michael Jackson before (posted below).

The project of South Carolina man Chaz Bundick, Toro Y Moi could easily be shoe-horned into the non-existent chillwave banner yet Bundick still manages to include a dizzying array of styles on his debut album. From glo-fi ambience to keyboard-led dance-pop to instrumental hip-hop/R&B-influenced jams, it’s a pretty exhilarating release and it has the feeling of being cloaked in a hazy barely-there memory.

It’s out now digitally of course but released properly on Car Park on February 23rd and there’s another full-length on the way too. He’ll be hitting SXSW in March too. A new video for ‘Blessa’ has just appeared which is below too.