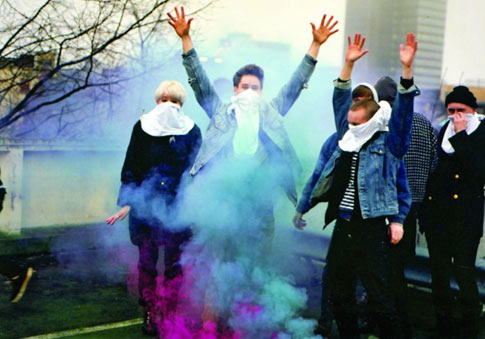 “We want WU LYF to be more than a band, in the same way FC Barcelona is ‘more than a club'”.

The ubiquity of new artists trying their hand at the mystery game is beginning to get a little tiresome. So in that light, it’s hard to tell whether WU LYF’s self-imposed obscurity is a deliberate attempt to please themselves and anyone else who is genuinely interested in their work over hype. But the problem with trying to obfuscate yourself in a linked-up media world is that you’ll inevitably attract attention to yourself. This is their brilliant single as an introduction to their music. More about their myth follows…

And so it has transpired so far for WU LYF (pronounced Woo Life) or World Unite/Lucifer Youth Foundation to give them their full name. Formed in Manchester in 2008, they initially consisted of four friends who played a residency in An Outlet coffeehouse in the city. After A&R started sniffing around, they attempted to push themselves further into the background and refusing to talk to anyone. It was at this point, around May last year, when I first came across them in a piece in NME about how cool and secretive they were.

They’ve since (apparently and if the photo is any indication) swelled in ranks, shunned label deals and went off to record their album independently in a disused church. As outlined in their recent mailing list missive, which is as good a manifesto as any (even if it’s wilfully cryptic), the band signed a publishing deal with Universal and they will release their debut album Go Tell Fire To The Mountain on June 13th in the UK.

If this is a band who are trying to trying to avoid the “churnover” effect but they’re not helping any of it with their talk of a “Lucifer Youth Foundation” and the involvement of a “war god” who seems to be Warren Bramley, the creative director of the Four23 ad agency as Said The Gramophone pointed out. The ad agency involvement suggests this is a band more comfortable with courting hype than they are suggesting. It’s not a stretch to feel like this is a band waiting to make an impact in an artful cultural KLF sort of way.

As for their sound, the word “intense” has been applied to the clutch of songs they’ve released in various forms through videos, MP3s and a 12″ last year. There’s a burning aggression to their vocals, like an agitated Wolf Parade playing swirling, cascading rock songs which can cut. They’ve certainly nailed the intrigue in their music if not necessarily the show around them.