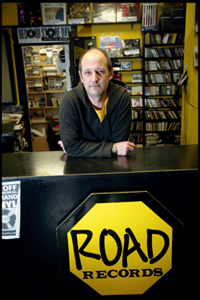 All this week, there will be guest posts from various people involved in different strands of Irish music – record shop owners, writers, bloggers, promoters, radio presenters, bands and more, telling us what Irish bands or artists they are really into right now.
First up: Dave from Road Records:

Paul Clancy is the former drummer with Dublin indie rock outfit National Prayer Breakfast and sadly passed away before this album was released. This is his debut album as was made with a little help from Kevin Connolly [aka Herm]. It’s a lovely collection of rustic country and folk tinged sounds.
[Buy from Road Records]

Cloudeater are a Dublin based two piece noise based outfit. Probably not to everybody’s tastes but we love this kind of stuff around here. Definitely one for fans of the likes of Sunn O, Earth, Jesu and Merzbow. Its dark, visceral and haunting.
[Buy from Road Records]

Probably one of our all time favourite bands to come out of this country in the last 10 years. These guys are always one step ahead of the posse, with each album taking them off in a slightly different direction. This one sees the band incorporate lots of krautrock-like rhythms into their trademark post rock sound.
[Buy from Road Records]

The debut album from this Irish electronic artist. It’s a really beautiful collection of downbeat and somewhat dark ambient electronica. One of the best late night headphone albums we have heard in ages.
[Buy from Road Records]

MP3: Hunter Gatherer – I Dreamed I Was A Footstep In The Trail Of A Murderer