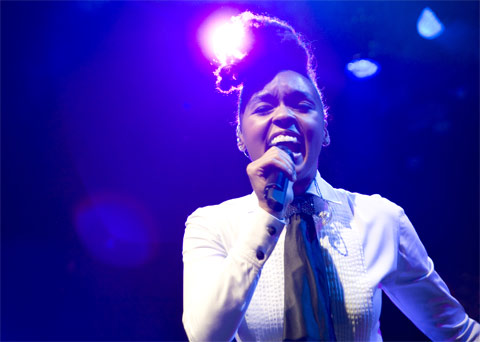 Note the addition in the headline of the ArchOrchestra because even if you’ve seen Janelle Monae in the last year or so, you’ve never seen her like this. Janelle has come a long way in terms of stage performances in a short time. It was already pretty special then, thanks to her magnetising stage presence and a superb band but this time around, there was a huge augmentation going on. A year ago I wrote “if she added backing singers, brass and dancers, well then, the live show would be incendiary.” Well, Janelle Monae’s “interactive emotion picture” has gone widescreen with the addition of brass, dancers, backing singers and a string quartet.

The show now encorporates at least 14 people on stage. Sometimes more. No longer is this a run-through of her album The Archandroid, the show is a jubilant display of pure entertainment. Monae’s voice is pitch-perfect and effortlessly on point throughout. She touches on the voice of Lauryn Hill at times, that same buttery emotion in her timbre. If it wasn’t obvious before, Monae is now covering her influences: Stevie Wonder’s ‘My Cherie Amour’, Sly & The Family Stone’s ‘Underdog’. Prince’s ‘Take Me With You’ and an absolutely stunning version of the Jackson 5’s ‘I Want You Back’ complete with perfectly-timed soul spin before the lights faded at the end of the song.

As for her own songs, the beefed-up players lended big cinematic heft to ‘Dance Or Die’, ‘Faster’, ‘Locked Inside’ and the hits of ‘Cold War’ and ‘Tightrope’ while the prancing dancers added frenetic energy to the stage and hooded masked men were used as props for Monae to spar in a one-two sucker punch dance. There’s even time for some on-stage painting and singing multi-tasking from Ms. Janelle during ‘Mushrooms & Roses’. There was no room for album tracks ‘Wondaland’ or ‘Oh Maker’ but the spectacle of the show was never in doubt.

After all that exuberance, they still pulled out a grand finale with the ‘Rock Lobster’-aping ‘Come Alive (The War Of the Roses)’ . The song now elongated into a jam involves the audience getting low to the floor, much jumping of bodies and an outro that makes it clear, that the ArchOrchestra are having more fun on that stage than most touring bands. There’s a camaraderie between them that rubs off on the audience throughout the show.

My third time seeing Janelle Monae and it was on another level up to the two previous. It’ll be fascinating to see where new songs and her clearly grandiose ambition will take her. This will be one of my shows of the year.