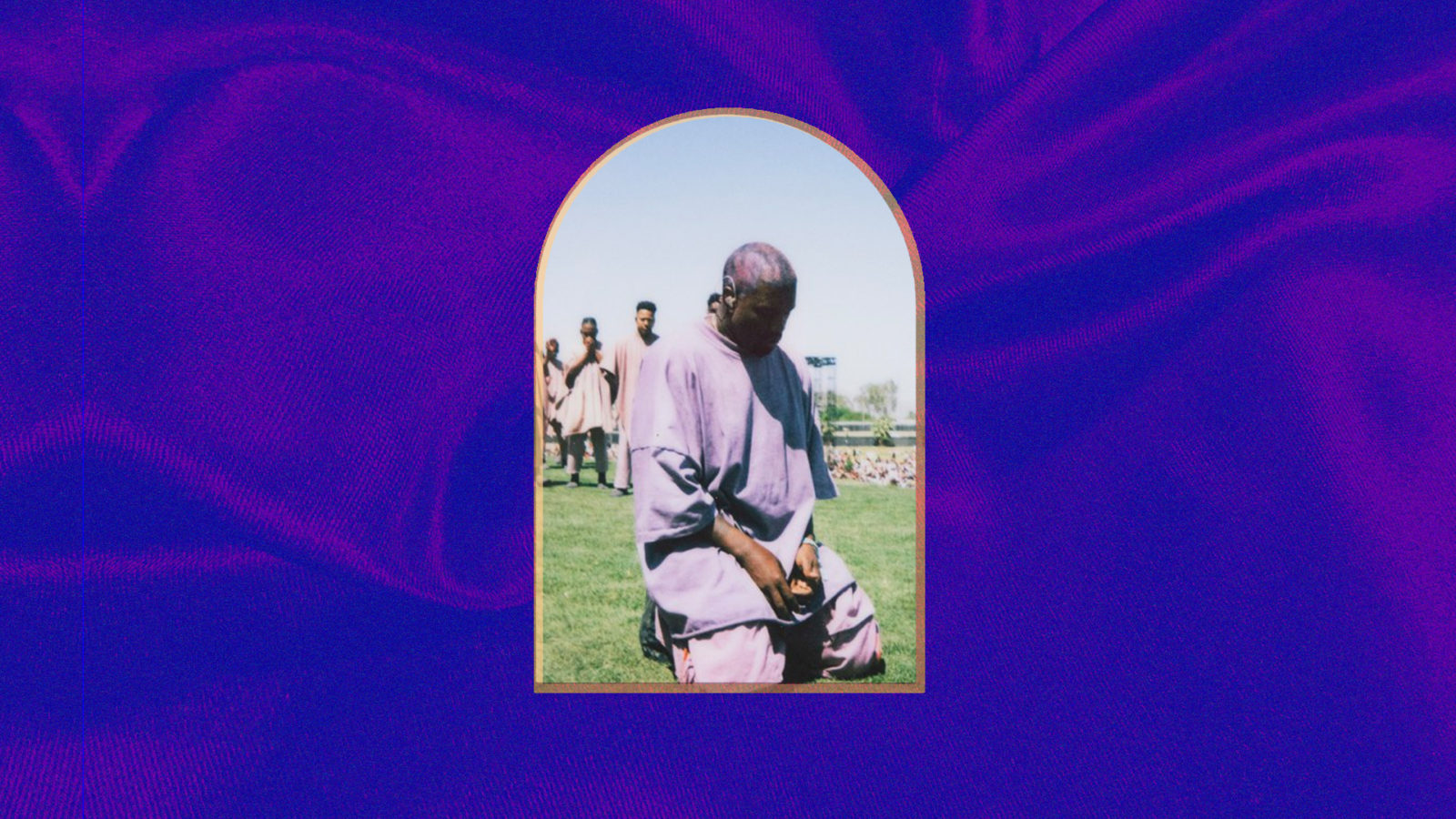 
There’s not really all that much gospel on Kanye West’s first gospel album.

In terms of traditional gospel music, it amounts to 161 seconds, roughly 10% of the 1,624 seconds run time on Jesus Is King. That’s made up of the album’s hyperactive opening track, ‘Every Hour’ & its limp closer ‘Jesus Is Lord’.

Not that God isn’t one of the album’s most prominent characters, Kanye’s faith is everywhere – absolutely integral to the thematic makeup of his new album. But, most of Jesus Is King plays much more like the melodic blend of the hip-hop Ye’s been honing dating back to The Life Of Pablo, as opposed to the result of the Sunday Service performances he has been putting on since late last year (the actual Sunday Service album Jesus Is Born is purported to be released on Christmas day, West told Zane Lowe last week).

So is Jesus Is King really all that much of a reinvention, musically speaking?

There’s no cursing on this new album, nor is there anything by way of sexually explicit content. This is significant in the telling of where Kanye is at in his artistic development. On Kids See Ghosts, Cudi and Kanye were talking about being “in the wrong hole” and “being lost”. West’s infatuation with sex and sexuality has been at the core of his music since day one, it’s strange to hear him come across so clean-cut.

Thankfully, clean-cut doesn’t necessarily mean self-righteous. Kanye may be born again, but he sounds more accepting of his own shortcomings. ‘Selah’ finds the artist “Keepin’ perfect composure / When I scream at the chauffeur / I ain’t mean, I’m just focused”. The dubious ‘Closed On Sunday’ comes with an implied violence – “Try me and you will see that I ain’t playin'”.

This honesty is becoming, it also adds some desperately needed self-awareness for what could have been a turgid born again lecture.

“Closed on Sunday / You’re my Chick-fil-A” is hands down the clunkiest lyric on Jesus Is King. No surprises there, Kanye’s stream of consciousness always produces a couple of facepalm stinkers.

Generally, Jesus Is King is lyrically solid – displaying a Kanye at his most mature to date. That’s not to be taken for granted, Kanye’s progress has never been linear. Some of the words on Ye felt like West had regressed about 10 years – I guess he’s happier now.

Generally, Jesus Is King is lyrically solid – displaying a Kanye at his most mature to date. That’s not to be taken for granted, Kanye’s progress has never been linear.

If God the Father plays a large supporting role, Kanye very much remains the protagonist in his own narrative on this new album. West seems to revel in trying to give his actual father advice on the superb ‘Follow God’ or in playing the family patriarch on the equally stunning ‘On God’ – (“That’s why I charge the prices that I charge / I can’t be out here dancin’ with the stars / No, I cannot let my family starve”) He’s grown and he’s more than happy to let you know about it. Jesus Is King is perhaps the most self-centred gospel record ever to put to release, and that’s a good or bad thing depending on how willing the listener is in following Kanye’s output without losing faith in him.

Those two tracks display some of Kanye’s very best production over his past three albums. ‘Follow God’ is Dilla-inspired bling era bop – a throwback to the work the Chicago native earned his reputation upon. Ye masterfully samples from ‘Father I Stretch My Hands To Thee’ , a gospel song with deep ties to African-American civil right movements and race relations in the US generally. Ye has never been oblivious to his heritage, despite some of his most unsavoury comments. Less than two minutes in length, ‘Follow God’ offers the most by way of actual hip-hop bars by far on Jesus Is King. An infectious flow and some killer lyrics, it’s an easy early highlight on the album.

If ‘Follow God’ harkens back to The College Dropout era, ‘On God’ is so much more akin to synth-laden production Ye championed during The Life Of Pablo. A superb chord progression, carried on a faster than life synth arpeggio is punctuated with some crisp snares and thud kicks in half-time. The hook, a riff straight off of Kanye’s trusty Akai MPC2000, is thrilling.

A superb chord progression, carried on a faster than life synth arpeggio is punctuated with some crisp snares and thud kicks in halftime. The hook, a riff straight off of Kanye’s trusty Akai MPC2000, is thrilling.

Moments like this offer up Kanye at his most universally admirable. An unparalleled master of his production craft.

I wonder at the impetus that drove Kanye to release Jesus Is King. It’d be easy to pin it all on being born again, needing to evangelise – Kanye says as much on ‘God Is’ – “I can’t sit here and be still / Everybody, I will tell ’til the whole world is healed” but West is still concerned with addressing Instagram likes and his taxes in the midst of declaring his newfound faith, which negates his attempt at a larger purpose here.

As much as West wants to praise God, he wants to advertise his newfound peace, to reach for a clean slate and present his new self to the world. In this respect, the album fails. Kanye cannot retcon his own history, the past is set, though he intends to try as he told Zane Lowe last week, fans are “about to get the George Lucas versions” of his older material, that could mean removing curses and making past releases fit into a more suitable spiritual mode.

We are addressing his present though and Jesus Is King packs a showstopper.

One of the most influential hip-hop groups of all time, Clipse (comprised of Pusha T & his brother No Malice) have long resisted financial or any other incentive to reunite. On ‘Use This Gospel’, West manages to pair them with none other than ’80s smooth sax king Kenny G for a serious contender for song of the year.

The production here is another throwback, this time to the pop perfect My Beautiful Dark Twisted Fantasy. The autotuned choir harmonies and piano pedals are so reminiscent of the sounds and textures of that Kanye era.

The only difference is that everyone involved seems a fair bit wiser and older than they did back in 2010. Ye seems genuinely vulnerable when he sings that “it’s a hard road to heaven”, putting his faith in “the father” instead of himself. Pusha is so much more uncomfortable with his past than his flex bars usually allow (“Who am I to judge? / I’m crooked as Vegas”). No Malice offers the most hope with a meditation (“From the concrete grew a Rose”).

It’s an all-star performance from the vocal cast, how could you not smile hearing Clipse back trading bars?

Kenny G’s sax comes as the rest of the arrangement goes. He spends about 30 seconds carrying the hook, variating and embellishing the melody per repetition. The sax thing could be a bit clichéd, but the execution is perfect here.

‘Use This Gospel’ is a reminder that Kanye’s artistry will always be his finest asset.

The sax leaps an octave, the final breath from Kenny G splashes colour into the silence. Then, the beat drops. It’s a triumphant moment, assertive and reflective in the same motion, perhaps the most spiritual on Kanye’s debut gospel album. ‘Use This Gospel’ is a reminder that Kanye’s artistry will always be his finest asset.

It’s a roll credits moment, but the credits never come.

Instead, we must endure ‘Jesus Is Lord’, 43 seconds of Ye reasserting his dedication to God through an established prayer – as if everything that’d come in the last 27 minutes wasn’t clear enough.

Jesus Is King ends with a whimper where it should have ended with a bang. Indeed, it seems like everything Kanye has put his hand to since MDTBF is flawed in one way or another. The artist who once proclaimed “I am a God” has been anything but immaculate artistically over the past decade (as per the Zane Lowe interview in his own words he’s currently settling for “undoubtedly the greatest human artist of all time”.)

That being said, it’s always been the contradictions and conflicts surrounding West’s music which bear the most interesting fruit.

On the one hand, an artist that birthed and concluded the bling era, introduced a generation to the melodic potential of autotune & somehow has 12 million-plus listeners fixated on a gospel album in secular 2019 – larger than life. On the other, a man of bleached assholes, sandwiches stolen from open fridge doors and truly distasteful political allegiances. One must acknowledge both.

Listen to Jesus Is King in full below.