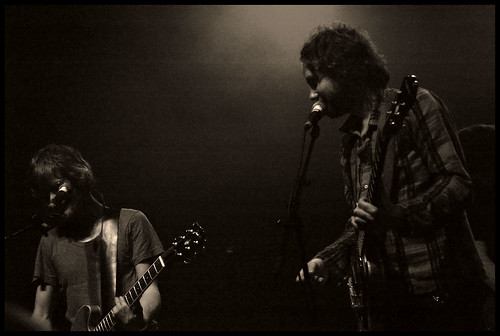 Gav was at the Kevin Drew show last night. Here is how his night went down. Photo taken from here, of another gig.

It always happens. Human error really is inescapable, no matter how much importance you put on something, and so it was that i found myself hurtling towards Tripod from Leeson Street after receiving a text that the man (and band) had taken to the stage. We seemed to levitate up the stairs and there he was. Kevin Drew, defacto leader of Broken Social Scene and author of possibly one of the albums of the year in ‘Spirit If…’ kicking out the jams to a packed house. All is well.

We just missed album staple (and personal favourite) “Safety Bricks”.The first song of the night to prick the ears is a typically languid version of “Fucked Up Kid”,with BSS compatriots Brendan Canning and Justin Peroff adding to not only the musical palette but the sense of occasion. Drew could’ve rested on his laurels and played only album tracks-but that’s another instance of human error. THAT bassline rolls out,and “Stars and Sons” widens the smiles of the throng present, with the goofily hip Canning taking lead vocals while Drew bashes the keys.

Another surprise is rolled out in the shape of a track from Canning’s forthcoming ‘…Presents…’ album, an uptempo rocker that suggests that Drew doesn’t wear the songwriting pants entirely! “TBTF” is introduced as “a song for your best friend” and the arrangement glistens and sparkles live as opposed to merely glowing on record. “Frightening Lives” is wheeled out in style as the keys from American Analog Set’s (and sometime BSS contributor) Andrew Canning come to the fore and the first swing dancers of the evening are spotted. That swing turned into rapturous bouncing as “Cause=Time’s” distinctive beat comes out. I raced to the front for this and discovered – as myself and Niall have noticed-that there’s always more room up the front than at the back in Tripod. Odd.

“Superconnected” came barging out of the speakers and we are lifted higher and higher, Drew himself noting “It’s upwards from here,ladies and gentlemen!” and asked us was it OK if he played the older stuff..I could’ve kissed the man. In tribute to Feist, he played a brilliant version of ‘Lovers Spit’ and Andrew Canning came out from behind his Rhodes to take the lead on an American Analog Set song. But then, those three chords and memories of climbing all over the owner of this very blog at EP ’06 came flooding back as Drew straddled the barrier and belted out a version of “Major Label Debut (Fast)”. How could that be topped? Well, As Nialler said in his previous post, by a cover. A U2 cover.”Oh my God,we’re teenagers again” squealed Drew as a thousand plus voices wanted to run and hide,and burn down love, and grab the fucker from where he was on the barrier and take him to ourselves.

Ending with a crowd-enhanced version of ‘When It Begins’, he bellows “DON’T-FOR-GET-WHAT YOU’VE FOUUUUUND!” and Tripod agrees-we’ve found something in this man,his band and his songs. A true celebration, marred only by the poxy sound (3rd gig in a row I’ve been to there and it has been dreadful-too low). Hurry back, we’ll be waiting.