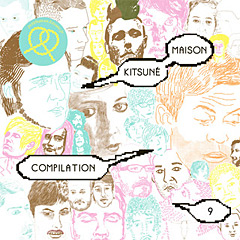 Kitsuné Maison compilations are always worth a listen considering previous compilations have debuted tracks from La Roux, We Have Band, Memory Tapes, MEN, The Drums, The Golden Filter and Two Door Cinema Club.

Number 9 in the series is out on the 26th of April and features tracks from Penguin Prison, Washed Out, yesterday’s just-introduced Jamaica, Crookers, Holy Ghost!, Monarchy, Hurts, Silver Column and more. Future music in the true sense of the word. Here’s a minimix by Jbag to give you an idea of what’s on it (The Holy Ghost! track sounds awesome).

Detailed tracklisting for both the minimix and the compilation after the juuuump:

01: WASHED OUT “Belong”
Washed Out is leading the ‘glo-fi’ scene, which has introduced that delicate electronic sound also known as bedroom synth-pop (this kid’s bedroom is in Georgia, USA). The fact he’s only been working on his music for a few months makes him only more fascinating.

03: PENGUIN PRISON “Animal Animal”
Penguin Prison is Chris Glover. His track ‘Animal Animal’ is at the crossroad of house & reggae. Swimming pool, club Tropicana, you know the kind… “I don’t want to think anymore, about anything that I can’t see. It’s about being a human being in modern society and thinking too much and wishing that you didn’t have to” he cryptically comments.

04: JAMAICA “Short and Entertaining”
Jamaica are two French boys produced by Xavier from Justice. The deal was: no synths to be used in the studio. Big potential.

06: JUPITER “Vox Populi (LIFELIKE treatment)”
Jupiter – indeed – sends us to Jupiter. And with Lifelike on the knobs,

07: YUKSEK “Supermenz (We’re Not)”
Yusek delivers ‘Supermenz’ the hardest track of the bunch. Must we remind you this is the paternity compilation? Could possibly turn into a ‘gay anthem’… sunday

08: FENECH-SOLER “Stop And Stare”
Fenech-Soler were originally endorsed by our friend Alan Braxe, now they’re on their way to conquer the charts.

09: TWO DOOR CINEMA CLUB “Something Good Can Work (The Twelves remix)”
Two Door Cinema Club are remixed by Brazil’s awesome The Twelves. It was a struggle to get hold of them, these guys are rather busy, they did us a massive

10: LOGO “La Vie Moderne”
Logo are two Parisians from the Penninghen art school, they’ll sure need a strong logo as backdrop on stage. In the meantime they get all heady and moody behind their synths.

11: SILVER COLUMNS “Brow Beaten”
Although we have no idea who sings (Ray Martin? Jimmy Sommerville?), Silver Columns are currently the most luscious act around, certified and guaranteed.

12: HOLY GHOST! “Say My Name”
Holy Ghost! are well classy. Their songs always sound so effortlessly easy. They’re from Brooklyn where it’s all firing off at the moment.

13: HURTS “Wonderful Life (ARTHUR BAKER remix KITSUNÉ edit)”
Hurts are very chic. We recommend the video on YouTube with the dancer’s black lace dress, the immovable look of the keyboard player and the – hands in pocket – singer. This lot looks the part. Proper idols, we reckon.

14: GYPSY & THE CAT “Time to Wander (JOAN OF ARC remix)”
Gypsy & Cat are Australians, and like other Aussies these days they combine Californian melodies and a little electronic twist. Think a youthful Fleetwood Mac with no ladies.

15: FELDBERG “Dreamin’”
Felberg are based in Iceland, proof that all is not bankrupt there. They might be running out of perishables but they still have melodies. They first met in January 2009, rehearsed together every tuesday evening and released their first track last October.

16: YOUR NATURE “Forward Motion”
Your Nature are Kitsuné’s new obsession, two brothers and some friends who met in creative literature classes. Lots of hair. Kicks ass and yet very beautiful and lyrical, makes you travel.

17: THE GOOD NATURED “Your Body is a Machine (ZEBRA+SNAKE remix)”
The Good Natured is a girl named Sarah McIntosh, intense and emotional, she could almost be Depeche Mode’s little sister. Only 3000 friends on Myspace, so it’s still early days…

18: MONARCHY “The Phoenix Alive (THE OCTANS edit)”
Monarchy are two guys – not the tough kind – crafting electronic pop. Sweet stuff, perfect to get babies to sleep.