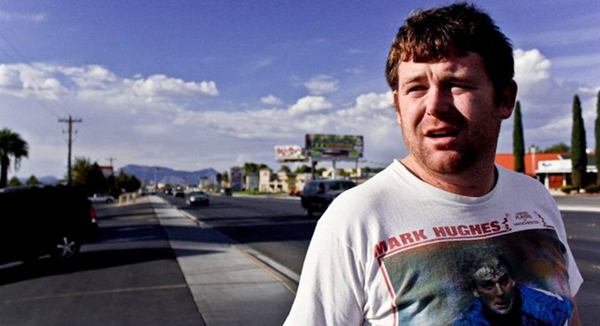 John Talabot will play a live set in Ireland this December

Like most teenagers who are really into music, I tried my hand at making some of my own with friends. My musical expression never really got beyond covers, although one band I was involved in that played a couple of summer gigs in my hometown of Newbridge called Chewbacca Defense were more ambitious than was the norm for 16 year-olds. Sure, we did covers sure but we added laptop samples, a DJ scratching records, Fruity Loops-generated bleeps and bloops to a rock staple lineup.  We covered DJ Shadow, Cornelius, Death In Vegas and all our favourites at the time. We were terrible of course, but hey, we were trying.

Present at at least one of those two “performances”, was a friend called Ciaran Dwyer. He was more interested in rollerblading at the time and turned up to the car park we were playing in on his skates to have a look at what we were like. We were school buddies, and would walk to school together with conversation inevitably surrounding our shared topic of interest, the Beastie Boys (we went as far as doing a fan site which the web archive still holds proudly in its depository).

As time passed I lost interest in playing guitar, I tried to make music on Fruity Loops  but I concluded I didn’t have the brain for it (probably what I really lacked was a basic compositional foundation that I never got past). Ciaran meanwhile, picked up an acoustic guitar himself; buoyed by folk artists like Mark Geary that he was into at the time, he learned some chords. He wrote some songs. He formed a band.

Band On An Island  “began over word trade offs 8 Mile style, two chord exchanges, skating and camping trips”. Ciaran wrote the songs and got mates in to play the songs with him. It was soon obvious he had a particularly gift for writing heart-on-sleeve lyrics about his hometown, that while they might not be relatable to those outside Ireland with their references to Athgarvan, dodging guards and dealing with begrudgers, that was a big part of the appeal. This was folk rock ‘n’ roll for the people. Its colloquialism was its strength.

Ciaran’s latest musical project Knoxville Morning, was born out a road trip to America in 2010. Inspired, as many before him, by the contrasting towns and cities of United States from New York to NOLA, Virginia, Vegas or the Tennessee town that gave the project its title, the songs feature back alleys of Austin, Mississippi volleyball girls, pouring a drink on Mark Linkous’ head, the Chelsea Hotel, the people, places, and all those indelible things that make America such a magnetising place for so many. It’s a triumphant collection of Americana-inflected folk rock.

Last weekend, the Knoxville Morning album was launched in Dublin in The Cobblestone. Featuring 17 musicians, drawn from Newbridge’s rich musical resource pool and a few blow-ins like The Mighty Stef; it was clear Knoxville Morning wasn’t just the work of one man. But Ciaran is the ringleader, the one who drives the project, a galvaniser and the chief rabid-rouser.

Over two hours, with sweat appearing progressively on the faces and clothes of both audience and band, and with many invited album guests jumping on and off stage, I was struck by the band’s all-encompassing support of Ciaran,  the people who helped him make Knoxville Morning a reality. It’s perhaps a familiar feeling for people close to anyone launching a creative endeavour.

The strength of reliance was inspiring. Here, was a friend pursuing his musical craft with full support of 17 friends and the assembled crowd. It wasn’t about perfection or being the best, just being honest in celebration and enjoying the creation. It was an infectious feeling, and it brought me back to why I tried my hand at music in the first place. It was a reminder of part of the reason I love writing about music. And it took a good friend to remind me.

Knoxville Morning is out now on The Firstborn is Dead Recordings and will be released in Germany through Tonetoaster Records in January 2013.

John Talabot will play a live set in Ireland this December