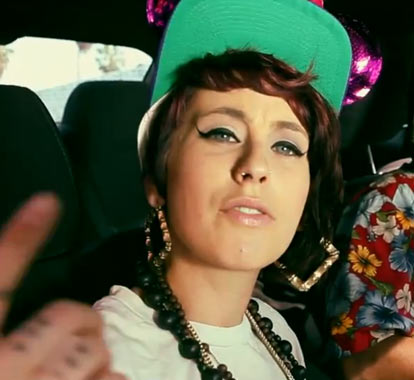 I’ve already been berated on Twitter for being late to mention this one but knowledge is not a competition so in case you hadn’t got a chance to check out Kreayshawn, here’s your intro.

A quick back story: Kreayshawn is an Oakland, California 21 year old MC who’s down with Lil B, Soulja Boy and Odd Future. She directed some not-great handheld music videos and some not great songs to date. Then ‘Gucci Gucci’ hit about a month ago and took off. At first you’ll notice Kreayshawn and her White Girl Mob collective friend DJ L1L D3BB13’s silly style which the song advocates over that “Gucci Gucci, Louis Louis, Fendi Fendi, Prada” shit. After that, it’s game over as the song goes into earworm territory.

3 million views later and Kreayshawn has signed a deal with Sony’s Columbia Records.

Watch out for Left Brain and Jasper Dolphin of Odd Future in the video.